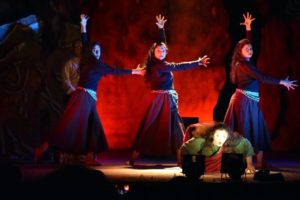 After 15 years of absence, veteran theatre actress Kamini returns to stage as the protagonist of  Euripides’ play Medea, directed by her ex-fiancé and famous theatre director Purushottam Dasgupta who had used Kamini’s acting ability and charm to make his plays successful, but had later married Ipshita, the daughter of an influential Minister. Kamini’s friend Kanchan is serving life-imprisonment for killing her new born male child out of vengeance towards her husband, who had got her previous pregnancies aborted since she was carrying a female foetus in her womb. For Kamini, Kanchan is the Medea of our time. Gradually Ipshita also starts identifying herself with Medea, Kanchan and Kamini. Kamini’s interview by a famous theatre critic Tonumoy, in Kolkata’s leading newspaper, reveals the present day story of several Medeas.

I have tried my best to give the complex fabric of gender politics a modern stage-language by designing the play with the austerity that it deserves. It was a challenging and thrilling project for me as a director, to bring out the essence of the concept of an intricate and intense subject brilliantly depicted by the playwright. Ultimately, I can humbly say, with chiaroscuro light design, absorbing sounds and a relatable set-design, Medeara has become a brilliant play to watch.

Goutam Mukherjee started his theatre journey as an actor in 1985. He directed the play Moinuddiner Bhoot for the group Samay in 1993 which was awarded District’s Best Production by Paschimbanga Natya Academy. In 1994, Goutam joined Chhandam and started acting in many remarkable plays by the troupe under the direction of Late Sudhangsu Dey, the pioneer director of the troupe. In 2015, at Chhandam, Goutam directed the play Lajja written and compiled by him. The play Medeara is his second directorial work for the troupe Chhandam.

Hara Bhattacharya is an eminent playwright of West Bengal who has been active in Bengali theatre since 1987. Most of his plays have been produced by eminent directors like Bibhas Chakraborty, Biplab Bandopadhyay, Chandan Sen, Anirban Bhattacharya and others. Some of his remarkable plays are Nashta Asim, Noti o Ghorachor, Adbhut Andhar, Aguner Barnamala, Ashtitwer Akaar, Oedipus, Medeara. He was awarded with Sundaram Puraskar in 1990, and West Bengal Journalists Association’s Dishari Award for Best Playwright in 1996. His play Aguner Barnamala was staged in Bharat Rang Mahotsav in 2007.

Chhandam was founded by a few young theatre enthusiasts of Raiganj in 1962. Since then it has been traversing the path of theatre uncompromisingly. It celebrated its golden jubilee in 2012 and has almost 60 outstanding plays to its credit, one of which has been crowned with presidential award and some of which have been honoured with several other awards. It has established its own theatre auditorium where most of the theatre groups across the state regularly stage their productions. Besides producing plays, the group frequently arranges seminars and conducts intimate discussions and workshops to develop the physical skills as well as the mental capabilities of the theatre aspirants of the group.