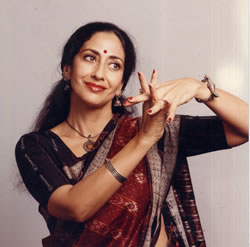 Sharon Lowen is a renowned artist of Odissi hailed by critics and connoisseurs for her perfection of style, grace, and superb abhinaya.  Her performances are spiritually rich and of high aesthetic order.

Sharon received her training in Odissi since 1975 from none other than Padmabhushan Kelucharan Mohapatra, the undisputed master and architect of the contemporary Odissi repertoire.  Sharon has bridged cultures performing extensively throughout India and the U.S.A. as well as Canada, Mexico, Indonesia, Africa and Kuwait, over the past 3 decades.

Sharon has received the Government of India’s Acharya Narendra Dev Sarokar Samajic Samman presented by the Prime Minister of India in 1991 and the Delhi Sahitya Kala Parishad’s Parishad Samman ’92 for her Outstanding Individual Contribution to Indian Arts.

Besides performances throughout India and abroad, Sharon has performed and choreographed for theatre, film and television in India, U.S.A., England, Spain and Africa.  Sharon was featured in her real life role in the best Telugu film of 1988, Swarna Kamalam (Golden Lotus) directed by K. Viswanath.  As an American born Odissi dancer, Sharon’s role in the film was to inspire the heroine to value her own Indian dance heritage.  Sharon has been featured on Star Television, World Net News Features, Central Television, England and regularly on Indian television.

A Fulbright and American Institute of Indian Studies Smithsonian scholar with an M.A. in Dance from the University of Michigan, Sharon has contributed to improving the appreciation and understanding of Indian dance traditions, both here and abroad, with scholarly articles and hundreds of lecture-demonstrations and concerts at universities, schools, museums and art centres and as a visiting professor at universities in the United States and India.

In addition to Odissi, Sharon has taken extensive training in Manipuri Dance since 1969, Mayurbhanj Chhau since 1975 and Seraikella Chhau since 1981.