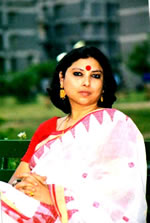 Savita  Singh was born  in Bihar, Arrah and  spent most of her childhood in the Middle East. She did her M.A and  M.Phil from Delhi University  and moved to McGill University for higher studies. She has her PhD on “The Discourse of Modernity in India: A Hermeneutical study”. She writes poetry and fiction both in Hindi and English.  She  has published two collection of poetry , Apne Jaisa Jeevan (A Life Like Its Own, 2001) and Neend  Thee Aur Raat Thee( There was Sleep and There was Night, 2005). Her English poems are published in many reputed journals like the Critical Quarterly, Indian literature and The journal of Poetry Society of India. Included in many anthologies, her poetry and prose writings have been translated into French, German, Spanish and almost all Indian languages. A collection of French translation of her poetry, Je suis la maison des etoiles has   appeared in 2008. An English translation of her Hindi Poems by Sukrita Paul Kumar has been published in their bilingual book, Rowing Together in 2008 in which she translated Sukrita ‘s poems in Hindi. She has received several honours and awards including Hindi academy award for 2002 and the coveted Indo-French ‘Raza Award’ for 2005.

Currently   she is working on her collection of short stories and a manuscript of meditative and explorative prose on’ Political Theory in India: a Hermeneutical Exploration.’  She is widely travelled in Europe and Americas.