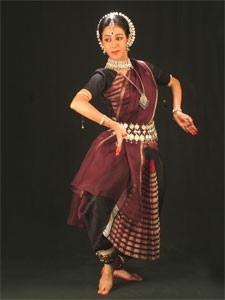 There was a breath of fresh air in the dance world at The Habitat centre auditorium on 30th july. Bindu Juneja breezed in with a quality performance after an absence of more than12 years from any stage in Delhi. A student of Madhavi Mudgal for more than 10 years, she married and didn’t just settle down in Bhopal. She continued to dance and teach at her own dance academy ‘Parn’. She studied the Kathakali style of movement from maestro Margi Vijay Kumar. This is the style par excellence of theatre, of facial expression, of abhinaya. Leila Samson in her book ‘Rhythm in Joy’ says ‘the Kathakali dancer can, through facial expression alone, show the fall of a flower as it wanders downwards from the heavens. With his eyes alone he can measure its progress towards him. He smells its fragrance…his eyes, nose and senses are activated to reflect a myriad reactions.’

It is this that reflected in Bindu’s performance and choice of pieces. Of 6 she did only one Pallavi (in Raag Jait Kalyan) and chose 3 abhinaya pieces to show the range and depth of her art.

The first ‘Priye Charushile’ an  Ashtapadi from the Geeta Govinda shows Krishna cajoling an angry Radha with a lot of flattery. Bindu did this with an easy grace and consummate skill and avoided the overacting that younger dancers are prone to in this ashtapadi.

This was followed by an abhinaya ‘Katana Bedana Mohi Desi Madana’ a composition of the 14th century Maithili poet, Vidyapati. The love lyrics describing the sensuous love story of Radha and Krishna and the poetry and prayers dedicated to Lord Shiva form a rich tradition of folk songs still sung in the region of Mithila in Bihar. They are also ideally suited to the Odissi style where the lyricism of the poetry is reflected in the sensuousness of the dance.

Bindu confirmed her mastery of expression of the Nayika separated from her beloved as well as her understated and confident exposition of the curvilinear movements of the dance.

The penultimate piece before the Moksha showed her dramatic skills in‘Ramashtakam’ depicting the various episodes from Lord Rama’s life as a son, a brother, a husband, a father, a king and as both friend and foe. Bindu’s skill in the theatrical aspect of the dance owes a lot to Dr. Kanak Rele the Mohiniattam veteran, but to combine in one seamless performance the quiet elegance of her guru Madhavi, the passionateexpressions of Margi Vijay and the abhinaya learnt from Dr. Rele we can safely say that we have another potentially great dancer in our midst who deserves much more than one performance in Delhi every twelve years..

Choreography was by Bindu and the excellent music was by Meera Rao.