India from the Western Viewpoint

A review by A.K. Chopra 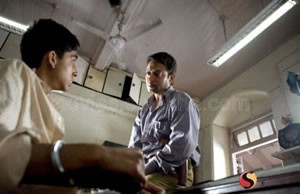 A Still from The Film

It is one of the rare movies which one would not like to miss simply because it has won so much of acclaim, awards, and is heading for the most coveted OSCAR awards. There is no doubt on its sleek direction, excellent editing, and music. However, after seeing, one wonders whether it can be seen again, the answer is plain ‘NO’. It is not one of those classic films, which being evergreen can be relished every time one sees it.

It is not an Indian movie, but a foreign movie made with India as the theme and makes one feel that though we have so many problems so has the other world too. Even so, it does not provide a solution or bring in some moral to the story. This is where it may not find favour to the Indian mind. The story line though quite near reality leaves many gaps. Firstly, for an illiterate boy from slum to reach the hot seat of crorepati contestant is nearly impossible. Having done so, and by providence, he knew answers for all the questions asked, as they pertained to his own life, it is difficult to imagine that in such a context when one has reached the Rs 10 million figure, the police can put him to the torture overnight and the boy is normal next day for the final onslaught to get Rs 20 million. Again after such a wonderful win next day, how come he sits alone for some moments in an empty station like Mumbai CSTM to locate his soul mate?

Rehaman’s music is wonderful and deserves the recognition he is getting.  He has made many superb renderings in the past but alas the foreigners have not heard or seen them.

It will be good if it wins OSCAR/s, but it is necessary for the OSCAR organisers to view the movies from Bollywood from Indian Viewpoint as well.