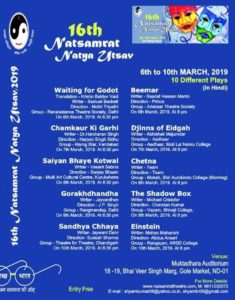 Natsamrat is one of Delhi’s oldest and most consistent theatre groups. Since its inception in 1998, Natsamrat has presented 1265 shows of 35 renowned plays. Ably led by Actor, Director and Visionary Shyam Kumar, whose philosophy has really been not only to evolve his own group but also to create space for all other theatre groups which are battling heavy odds to survive in theatre. Thus 16 years ago, when Natsamrat was barely four years old, he started the Natsamrat Natya Utsav so that other theatre groups also get a platform to perform. Three years ago, again Natsamrat widened its landscape by starting a Natsamrat Mahavidyalaya Natya Utsav, a student theatre festival, providing a parallel platform for the upcoming theatre generation to evolve and grow. Thus despite limited resources such a grand festival has evolved and grown. Natsamrat theatre festival thus begins with a bang on 6th March 2019 at 6.30 pm with the first performance of Waiting for Godot. The schedule is given above and the synopsis of the plays are given below.
On 9th March, at the same venue, Natsamrat will award the Thespians  who have been supporting Theatre as Practitioners, on Stage, off stage and as promoters and critics. Read more about elsewhere
1.    WAITING FOR GODOT
Translation by Krishna Baldev, Witten by Samuel Beckett and Directed by Mohit Tripathi
On 6th March, 2019 at 6:30 p.m. 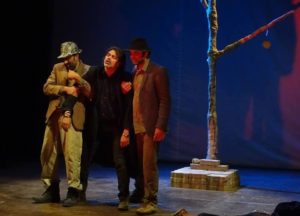 The plot of Samuel Beckett’s Waiting for Godot is simple to relate. Two men, Vladimir and Estragon, meet near a tree. They converse on various topics and reveal that they are waiting there for a man named Godot. While they wait, two other men enter. Pozzo is on his way to the market to sell his slave, Lucky. He pauses for a while to converse with Vladimir and Estragon. Lucky entertains them by dancing and thinking, and Pozzo and Lucky leave. After Pozzo and Lucky leave, a boy enters and tells Vladimir that he is a messenger from Godot. He tells Vladimir that Godot will not be coming tonight, but that he will surely come tomorrow. Vladimir asks him some questions about Godot and the boy departs. After his departure, Vladimir and Estragon decide to leave, but they do not move as the curtain falls. The next night, Vladimir and Estragon again meet near the tree to wait for Godot. Lucky and Pozzo enter again, but this time Pozzo is blind and Lucky is dumb. Pozzo does not remember meeting the two men the night before. They leave and Vladimir and Estragon continue to wait. Shortly after, the boy enters and once again tells Vladimir that Godot will not be coming. He insists that he did not speak to Vladimir yesterday. After he leaves, Estragon and Vladimir decide to leave, but again they do not move as the curtain falls, ending the play.
2.    CHAMKOUR KI GARHI
Wriiten by Dr. Harcharan Singh and Directed by Harjeet Singh Sidhu
On 7th March, 2019 at 6:30 p.m. 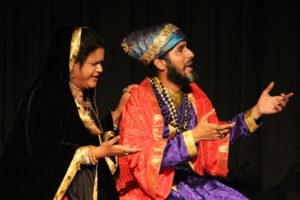 ‘Chamkour di Gadi’ play Regarded as one of the most important battle of the Sikh history. It was against the Mughal army led by Nahar Khan; the Muslim commander was killed, while on Sikh side the remaining two elder sons of the Guru – Ajit Singh and Jujhar Singh, along with other Sikh soldiers were killed in this battle.
3. SAIYAN BHAYE KOTWAL
Wriiten by Vasant Sabnis and Directed by Sanjay Bhasin
On 8th March, 2019 at 6:30 p.m. 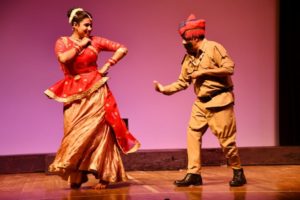 Saiyan Bhaye Kotwal is a translation of famous Marathi folk play Vichha Majhi Puri Kara, which was written by Vasant Sabnis. The story of the play is focused on the king and his scheming prime minister. As per the hierarchy, the present Havaldar have to be promoted to that post. However, the wronged Havaldar and hi girl Mainavati, a dancer, plans to frame the new Kotwal. The play is based on traditional tamasha and is a slapstick comedy which brings out the political undercurrents of nepotism.
4. GORAKHDHANDHA
Wriiten by Jayvardhan and Directed by J.P.Singh
On 9th March, 2019 at 6:30 p.m. 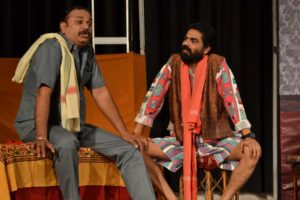 When money becomes the be all and end all of one’s existence, when money becomes one’s religion then all relations, all ethics and morals are rendered meaningless. When one’s sole aim is to accumulate wealth then the person’s conniving mind keeps on scheming towards that end. There are some people who are adept at extracting something out of nothing. The protagonist of this play is such a character who will resort to any means to hoodwink people out of their money. While seemingly he is being helpful and charitable towards others, however, all he is doing is helping himself in the guise of helping others. He believes that there is a certain honesty to his dishonesty. In his games of deceit, he is forced to tell lies after lies till in the end he is so caught up in his web of untruths that he is neither able to give up nor get out. Gorakhdhandha is a fictional play based on true stories. Its dialogues and anecdotes don’t just tickle our funny bone but rather force us to break out into bouts of laughter.
5. SANDHYA CHHAYA
Wriiten by Jaywant Dalvi and Directed by Sudesh Sharma
On 10th March, 2019 at 6:30 p.m. 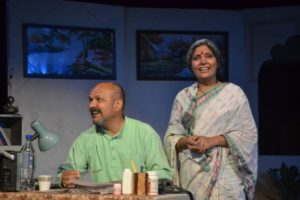 Sandhya Chhaya is a story about an old couple, an aged couple who spent their lives in the upbringing of their children and they are the ones who live alone and long for the love, affection and togetherness of their children. It is a story about a man and woman fondly called Nana, Nani respectively and it deals with the emotional turmoil the parents have to go through. In spite of having being deprived of love from their children, they still have the courage to fight the melancholy and pathos of their lives. They support and love each other and as the play unfolds, the audience also falls in love with them. Older people who are not so useful in today’s materialistic age bear the brunt of the changing values. They get lonelier and lonelier. This play is entertaining and simultaneously it tells us about old age and Loneliness. It is a great play, which can be very easily called a classic of Modern times. They have two sons, Deenu (the elder one) and Nandu (the younger one). Deenu is settled in USA and Nandi is in the Air Force. Deenu very rarely comes to meet his parents. He just sends money at regular intervals, meanwhile as the play progresses, they get to know that Nandu has been killed in the war. The whole play revolves on the nuclear families’ concept where in the parents are left alone and their children are settled somewhere else. The whole play is poignant collective mixture of emotions portrayed by an old couple, be it happiness, loneliness, love for kids, their childhood etc. On the whole, the play stresses on the fact and asks the society a very straightforward question that parents who have been there for us the whole life, do they deserve such a lonely old age? Do they really?
3rd Mahavidyala Natya Utsav
1.    BEEMAR
Wriiten by Saadat Hassan Manto and Directed by Prince
On 6th March, 2019 at 8 p.m.
2.    DJINNS OF EIDGAH
Wriiten by Abhishek Majumdar and Directed by Aadhar
On 7th March, 2019 at 8 p.m.
3.    CHETNA
Wriiten and Directed by Team
On 8th March, 2019 at 8 p.m.
4.    THE SHADOW BOX
Wriiten by Michael Christopher and Directed by Chandan Kumar
On 9th March, 2019 at 8 p.m.
5.    EINSTEIN
Wriiten by Mohan Maharishi and Directed by Abdus Ansari
On 10th March, 2019 at 8 p.m.