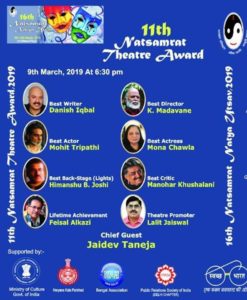 Natsamrat is one of Delhi’s oldest and most consistent theatre groups. Since its inception in 1998, Natsamrat has presented 1265 shows of 35 renowned plays. Ably led by Actor, Director and Visionary Shyam Kumar, whose philosophy has really been not only to evolve his own group but also to create space for all other theatre groups which are battling heavy odds to survive in theatre. Thus 16 years ago, when Natsamrat was barely four years old, he started the Natsamrat Natya Utsav so that other theatre groups also get a platform to perform. Three years ago, again Natsamrat widened its landscape by starting a Natsamrat Mahavidyalaya Natya Utsav, a student theatre festival, providing a parallel platform for the upcoming theatre generation to evolve and grow. Thus despite limited resources, such a grand festival has evolved and grown. Natsamrat theatre festival thus begins with a bang on 6th March 2019 at 6.30 pm
On 9th March, at the same venue, Natsamrat will award the Thespians who have been supporting Theatre as Practitioners, on stage, off stage and as promoters and critics. The awards have been well established as these were started 11 years ago. This is the 11th edition of Natsamrat Theatre awards and are looked forward to as an acknowledgement to decades of creative efforts put into Theatre. The Awardees this year are: