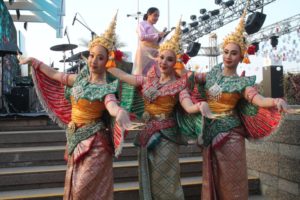 His Excellency Mr. Chutintorn Gongsakdi, Ambassador of Thailand, inaugurates the festival at the Plaza, Select Citywalk, Saket, New Delhi
The three-day festival is the third edition of the annual cultural event aimed at strengthening bilateral ties and cultural exchanges

New Delhi, 15th March 2019: From scrumptious Thai food to impressive couture and mesmerizing Thai music! It was a date to remember for the residents of Delhi who were treated to a splendid evening of Thailand’s beautiful culture on the opening day of the Namaste Thailand Festival 2019, organized by The Royal Thai Embassy.
The Namaste Thailand Festival 2019, that marks 72 years of Indo-Thai Diplomatic Relations, was inaugurated this evening by His Excellency Mr. Chutintorn Gongsakdi, Ambassador of Thailand to India. The three day festival will introduce the people of Delhi to the unique and diverse culture of Thailand, a country that shares centuries of close bonds with India. The festival was first rolled out in 2017 with an aim to strengthen bilateral ties, and increase cultural exchanges and people to people contacts between India and Thailand.
“In terms of bilateral relationship, India has had a good, peaceful relationship with Thailand. But we are still in the early stages. Our trade has had an increase of 30% year on year in 2017 and 2018, which is about 12 billion, but we have much more to achieve. What we do have is good people to people cultural relation and we want to build on that foundation and let it deliver political and economic dividends. So that trade and investment is much larger than this. Namaste Thailand Festival is an initiative in that direction.”, said His Excellency Mr. Chutintorn Gongsakdi, Ambassador of Thailand to India.

The festival included interesting features and stage performances by Thai artists including the much popular Thai band Asia-7. The fusion folk-jazz band from Thailand is much popular in India having performed at a series of festivals and shows including the Delhi International Jazz Festival.

The festival put together by the Ministry of Culture of Thailand brings a number of Thai artists and cultural ambassadors to showcase the diverse and exquisite culture of Thailand. When it comes to Thai culture, the food is an unmissable aspect of it. Renowned Thai restaurant Nueng Roi by Radisson Blu, brings forth a mouth watering experience of Thai cuisines as part of the festival.
Among other attractions at the three day festival are stalls that offer unique and exquisite Thai jewelry, aroma herbs, textiles and fashion garments, handicrafts, spa products as well as souvenirs from northern of Thailand.
The festival also offers a series of Thai craft activities including mulberry paper mini umbrella making and fan painting, personalized mini umbrellas, body paint, button badge making and photo booths with Thai costumes.
The cultural fiesta ends in Delhi on Sunday, 17 th March, 2019.