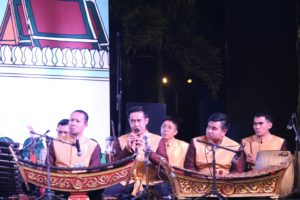 Thousands in Delhi came over to celebrate the three-day Namaste Thailand festival, which was organized by the Royal Thai Embassy from March 15 th to 17 th 2019, at Select Citywalk New Delhi. Other than the vivid cultural extravaganza on display, the festival was witnessed by Ambassador of Vietnam to India, His Excellency, Mr. Ton Sinh Thanh, and Ambassador of Myanmar to India, His Excellency Mr. Moe Kyaw Aung. Thai umbrellas, body art, clothing and jewellery, an exquisite cuisine, as well as scintillating performances left the audience
spell-bound.

“It has been exciting three days of the festival and we have experienced more people visiting us than the last year. India has had a good, peaceful bilateral relationship with Thailand. We are grateful that things are growing. We have over 300 flights between us, and flights are a great enabler in this cultural exchange. We hosted 1.6 mn Indian tourists last year and we had a projection of 2 mn tourists by 2020, which we are set to achieve this year. By 2030, we expect to have 10 mn tourists flying to Thailand. Our trade has had an increase of 30% year on year in 2017 and 2018, which is about 12 billion, but we have much more to achieve.” said His Excellency Mr. Chutintorn Gongsakdi, Ambassador of Thailand to India.
Enthused young and old people came together to experience the myriad of colours and cultural activities that were on display at the festival. While couples enjoyed donning Traditional Thai Clothing and got themselves captured, children and young women loved the body art and tattoo painting on their arms and wrists.
The centre stage saw the thick of the action where the Thai-awareness of Indian audience tested. It was surprising as how many Indians actually got the answers to a Thai quiz right in first attempts, with the winners exulting in joy.

Scintillating performances by Thai artists, who donned beautiful and decorated traditional Thai attire, mesmerized the audience as they depicted various stories including that of Ramyana on stage, and the action packed Martial arts display, which was beautifully choreographed, left the audience amazed.
The Miracle of Siam, a mythological journey through dance on stage setting Thai mood right. Dancers take the audiences on a journey to the divine
Earlier in the festival stressing on the strong love for food, culture and arts in both the countries His Excellency Mr. Chutintorn Gongsakdi, Ambassador of Thailand to India, said, “What we do have is strong cultural relations between people of both countries and we want to build on that foundation and let it deliver political and economic dividends. So that trade and investment is much larger than this. What Namaste Thailand is bringing to all is
the experience of Thai-ness. When Indians are more familiar with Thai culture, they would want to visit the country as well. The perception about India is also changing in Thailand. This festive interaction between two cultures is an initiative in that direction.”
Watching the Ambassador of Thailand to India, His Excellency Mr. Chutintorn Gongsakdi, Ambassador of Thailand to India, wielding the wooden ladle behind the stove, as he displayed his culinary skills by cooking some mouth watering Thai dishes was something really special for the audience.
Many with strained shoulders and neck enjoyed the relaxing demonstrations of Thai massages at the festival. While over 28 stores which showcased an array of Thai goodies, replicated a busy street of Thailand where people shopped to their hearts glee.
Fusing traditional Thai music with modern jazz, the renowned Asia 7 band took the audience on each evening at an all time high. As the three day event concluded, Delhiites were left wanting for more of the Thai experience.