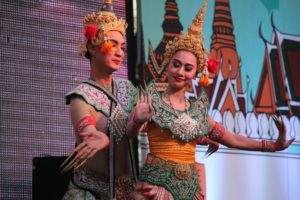 New Delhi, March 16, 2019: It was a treat for Delhiites in real sense. The Thai cultural fest featuring music, dance, craft, cuisines and a host of other activities played host to the people of Indian capital at the Royal Thai Embassy
in New Delhi on the second day of the Namaste Thailand Festival 2019. Hundreds of local residents who participated in the festival were treated with musical and dance performances by Thai artists. The popular Thai band Asia-7 enthralled the audience with its powerful performance at action packed evening.
“In terms of bilateral relationship, India has had a good, peaceful relationship with Thailand. But we are still in the early stages. Our trade has had an increase of 30% year on year in 2017 and 2018, which is about 12 billion, but
we have much more to achieve. What we do have is good people to people cultural relation and we want to build on that foundation and let it deliver political and economic dividends. So that trade and investment is much larger
than this. Namaste Thailand Festival is an initiative in that direction,” said His Excellency Mr. Chutintorn Gongsakdi, Ambassador of Thailand to India.
The Thai cultural festival was first organised in 2017 with an aim to strengthen bilateral ties, and increase cultural exchanges and people to people contacts between the people of two great nations.

The Cultural exchange is one of the cornerstones of evolving relationships between any two countries. This especially becomes relevant when India and Thailand have a shared history and cultural heritage.
To strengthen the bond of friendship and people to people contact, the Namaste Thailand Festival organized by the Royal Thai Embassy, has played a crucial role in bring the people of two nations closer than ever.
The festival, organized at Select CITYWALK in New Delhi, showcased the diverse and exquisite culture of Thailand, its mouthwatering food and many attractions that people across the age-group can enjoy.

The Thai cuisines are an absolute must if one is visiting the Thai fest. The festival, beginning at 3 pm on all the three days from 15 th to 17 th March, also features renowned Thai restaurant Nueng Roi by Radisson Blu.
The biggest attractions of the festival were the Ambassador of Thailand to India, His Excellency, Mr. Chutintorn Gongsakdi, cooking traditional mouthwatering Thai cuisine.
There are 28 stores from Thailand at the festival showcasing an array of fun workshops and an exciting shopping experience. Other key attractions of the festival includes art and handicraft, ceramic, clothing line including silk and
cotton, paper flowers, women clothing, jewels, aroma herbs, spa products as well as souvenirs from northern of Thailand.
The festival also offers a series of Thai craft activities including photo booths with Thai costumes, mulberry paper mini umbrella making, fan painting, personalized mini umbrellas. These traditional umbrellas are rich with colour and designs being famous world over. The tradition of these umbrellas goes as far back as 5,000 years
and has been a key feature of Thai Royals, religious leaders, and other dignitaries. The participants tried their hands at another-Fan painting- which is much loved by one and all.
The cultural fiesta ends in Delhi on Sunday, 17th March, 2019.