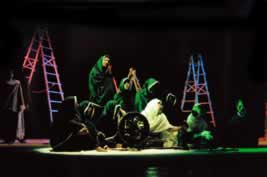 One has been a great admirer of Kewal Dhaliwal’s work and when Madiha Gauhar, the theatre director and actor from Pakistan recommended it to me I realized that it would definitely be a momentous occasion with an intercontinental flavour. And sure enough it was. Like some of Kewal’s previous productions, this too was an intensely moving experience.

Manch-Rangmanch’s  Yatra 1947, conceived without a script and structured through improvisations, was performed in the Bharangam Fest on 9th January 2008. It draws its material from real life incidents, often from oral history—tales told by elderly relatives who had been through the trauma of the times—portraying the suffering of the people who had to undertake arduous journeys, most often, away from their homeland, to another country and milieu. The play consists of more than 40 poems, originating from both India and Pakistan, with theatre students from both sides of the borders taking part.

At the end of the show with audience applauding quite a few of them holding lighted candles of peace and brotherhood in their hands. When Madiha Gauhar asked them if they knew which actors were from India and which ones were from Pakistan, they all said in unison “we don’t even want to know.” Such was the extent to which the audience had been moved by the depth and emotions of the poetry and the fluidly conceived choreography.

As Kewal puts it; “All of us had heard of Partition through the various stories told by our elders. As the days went by in the theatre workshop, and we started to actually perform those stories, we gained profound insights into what those people would have gone through. Thus one of the purposes of this workshop was accomplished. We have taken small steps in making the younger generation aware of the tragedy of the Partition, making them value both the countries. The play does not try to rub salt into the wounds of Partition, but rather attempts to heal them, to transform the barbed wires of hatred into soft lines of life and love. The Punjabi Theatre group Manch-Rangmanch hails from Chandigarh and has also taken its plays to England, Canada, Germany, USA, Pakistan and Bangladesh.