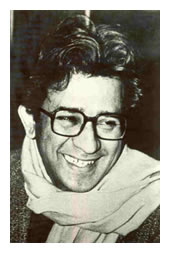 Jan Natya Manch (Janam) remembers Safdar Hashmi on 1st January every year by performing in Sahibabad at the very same place, where he was assassinated on January 1, 1989 by goons of the ruling party. This year too the event was remembered .as a mark of defiance to the perpeturates of the crime. Moloyshree, Safdar’s Widow, Sudhanwa Deshpande along with Janam’s actors performed Sangharsh He Hai Rastaa in a packed Ambedkar Park. The street play performances were interspersed with revolutionary songs Sung by Janam actors and composed by Kajol Ghosh. The event was supported by CITU whose volunteers controlled the massive crowds and provided background support. CPM leader Brinda Karat, a former Janam activist, was also present on the occasion. The audience was very enthusiastic and cheered all the way. Sudhanwa’s hilarious rendition of George Bush dressed as Uncle Sam in One Two Ka Four was greeted by guffaws from the audience. The play highlighted India’s weak foreign policy while negotiating the Nucleardeal with USA and other related issues, Delhi Young Artists Forum did a street play Dilli Door Hai on the forthcoming Commonwealth games and it’s impact on unorganized sector workers of the National Capital Region of Delhi

Janam also organized a Gadar Mela to commemorate the Indian Sepoy Mutiny when in 1857 Indian soldiers killed their British officers and tried to expel the British from India. The format of a typical Diwali Mela was used to educate the visitors about this important event. Janam volunteers cooked the food themselves. The food stalls had rare delicacies like Shakargandi ke Khire, Bajre key Tikki, Sattu ka Paan, Tapioca and what not. There were games for children which included, Quiz Programs, Jigsaw and Crossword puzzles. There were kids events like Fancy Dress Parade. The Sahmat Exhibition was used to enlighten the young audience about the hard won independence.