a Documentary film Review by 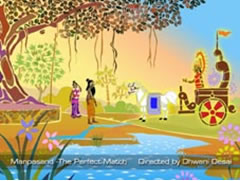 The Perfect Match’ by Dhwani Desai

The wonderful world of tales from the Panchatantra is open to numerous tellings and retellings. The extraordinary elasticity of these tales mean that one can enjoy seeing in them current, contemporary concerns embedded in their structure.

The animation documentary ‘Man Pasand – The Perfect Match’ by Dhwani Desai about the “journey of a father in search of a suitable groom for his daughter, which was screened at the 4th IAWRT Asian Women’s Film Festival at the India International Centre, provoked some heated discussion.

Some of the questions raised were whether the selection of the Panchatantra tale itself as a subject of the film was a bit regressive. Did it imply that the ‘she-mouse’ could never have ‘lofty ambitions’ and ideals; unable to aspire to marrying a ‘god’ instead of the implications of marrying only a ‘mouse’ – as this would restrict her to her lowly status.

Some in the audience wondered if the film maker had thought this through and whether its repercussions had occurred to her. Moreover the answers provided by the defensive film-maker present on the occasion were not considered very satisfactory either. Later, in an informal session, outside the screening venue, someone in the audience asserted that the woman/mouse had been allowed to freely choose her future husband by the father, and wasn’t this a progressive step?

Some others wondered why the Children’s Film Society had decided to use this particular fable and sponsor it. Was there any ominous conncection, or ulterior motive in doing so?

However, a closer reading of the film would suggest that the agency the ‘she-mouse’ enjoys in willfully rejecting suitor after suitor and finally settling to her own choice – the ‘he-mouse’ is in fact, radically subversive and extremely liberating in a different level.

This reading is in fact consistent with the moral allegory of the film’s structure – the false bravado of the fiery sun, the coldness of the ‘puffed up’ god of ‘wind’, the blackness of the god of thunder, the hard rigidity of the so-called ‘solid’ mountain god – all in contrast to the deceptively insignificant mouse that can actually terrify the mountain god by merely boring a hole in its side.

The entire parable actually serves to function as a tremendously subversive way of looking power, and what we perceive as strength and where true strength actually lies.

The entire parable makes us re-examine our own notions of strength as well as gender roles (such as the typically ‘masculine’ desirable qualities in a suitor of ‘strength’, solid’ character, etc).

Why is it that we aren’t able to effectively read and analyse allegory and animation, and are unable to see parables from a multiplicity of viewpoints and instead get weighed down by our attitudes and readings?

The exposure to many diverse films and the analysis that follows the screenings is vital if we are to progress not only in our cine-literacy but also in the new reworking of myth and fable in our lives.