Shiela Bhatia – A legend of Indian Operas passes away

An Orbituary by  Smita Vats 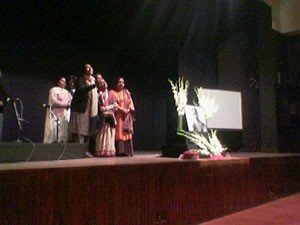 Sobbing actors and singers bid Sheila Bhatia Farewell at a Memorial Ceremony on the 22nd February, at the National School of Drama. A Theatre Legend of all times she had passed away peacefully after breakfast on 17th February 2008.  Shiela Bhatia was born in Sialkot. While she had no formal training in Punjabi folk music, the only music she had learnt was till class 8, her knowledge of Punjabi folk, some say, even surpassed Bulle Shah. She drew from this knowledge all her life. She would have been 90 on the 1st of March.

Once in Delhi, she along with Hali began the Delhi Art Theatre. With Shiela Bhatia, was born Punjabi Opera. Shiela wrote and directed plays in Urdu and Punjabi. During her lifetime she wrote and produced 29 original Punjabi operas. The first wasCall of the Valley which was based on her experiences in Kashmir (pre-partion) Heer Ranjha was the first full length musical that she wrote as well as directed. That play is known for the mark it left on audiences at that time. Some other plays she wrote are Chann Badla Da, Ghalib Kaun tha, Nadir Shah and Dard Ayega Dabe Paon.

She lived all her life in Lahore, Kashmir and Delhi , which she finally made her home. Despite her best efforts, the Delhi Art Theatre  had to be shut down due to a lack of funds and loosing artists to radio and TV. This was a huge loss to Punjabi Opera and to the nation.