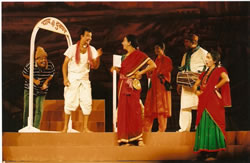 Having spent the majority of my 28 years in the hospital campus it wasn’t unusual for me to be quite familiar with the surroundings. As a young child I used to accompany my father to the fruit vendor across the road, often I would find medical students clad in their aprons with their stethoscopes hung carelessly around the shoulder clustered around the teashop. On further enquiry I came to know the teashop was called Thadi. As I grew up, my interactions with medical students increased and slowly the word Thadi found a place in my jargon.

I would often dream of sitting on the Thadi and having a cup of tea. My father would rebuke me by saying that one has to burn a lot of midnight oil to be eligible for that rustic charm. I did burn midnight oil but as luck would have I had to go Poona for doing my medical studies as a result of which I was deprived of this rustic charm.

AFMC being a defence establishment there wasn’t anything like a Thadi instead we had a huge canteen with well-lined chairs and uniformed waiters. A distant cry from the roadside Thadi. Canteen was quite often a misnomer in AFMC as one had the CSD wherein one could buy everything sundry, the wet canteen wherein one could gossip over a cup of tea, the cafeteria where one  could get a hot cup of coffee and a delicious bun bhurji even in the wee hours of morning.

As the clock used to strike four, hordes of students used to make a beeline towards the canteen.  What better was than a cup of steaming coffee to relieve one of postprandial somnolence!  The discussions in the canteen used to be as varied as Sachin’s cover drive to our Professor of Surgery’s going abdominal girth. Our canteenwala had a very strong sixth sense and he somehow could guess that the monthly allowance had come from home and would promptly catch shirkers to settle their long overdue monthly bills. It is said that this man could smell money in our pockets even in presence of pungent smell of onions & garlic. Well exactly he was not a Jew, but the man could take care of money, as no other living mortal was known to have taken care. There was strong rumour that a few renowned industrialists of Pune used to visit him after dark for consultation.

Whether the rumour is true or false does not concern me or for that matter to readers of this treatise.

Well it reminds me of the marathon runner Sardar Gurmeet Singh. His hobby was to give a feast to his fellow cadets without spending a single paise from his own pocket. It is a different thing that his pocket was always empty. To foot the lavish feasts he would lure the cricket crazy canteenwala into laying a bet over some obscure cricket record.   Yours truly, who was considered a walking encyclopedia on sports, would often referee the bets. As a result of which I always had my share of mouth-watering omelets for free.

Canteen used to be a great place to study humanity. The jovial Jat, bulky surd, the god fearing tam bram, the nervous wreck, in fact, almost everyone used to be there. If there were a place, wherein one wanted to study human character, canteen was the place to be. Canteen used to also serve as a rendezvous for many of the young lovebirds, wherein they could sit for hours undisturbed. Come the exam season and the canteenwala used to be a happy man. For it meant an endless supply of bun bhurjis and cups of steaming coffees. During the exam times a visit to the canteen was mandatory for not only did it provide one with the necessary dose of caffeine but one could also discuss something important with other batch mates.

The cafeteria owner at AFMC was a pot bellied gentlemen called Laloo, one had to see him to believe how popular he was. From playing the role of agony aunt to posing as a model for the portrait competition – he had done it all. Laloo had this strong sixth sense wherein he could guess correctly as to whether the monthly allowance had arrived or not. Promptly he would ask for the dues to be settled. Laloo did help many of us in need. For those of us who were weak hearted Laloo was always there to provide us with words of encouragement and oily bun bhurjis.

For many of my friends bunking a daily visit to the canteen was considered a sin. Canteens were visited with the same religious fervor as holy shrines were. Canteens also provided us with the necessary break one so often needed after going through the bulky harrisons and baileys.

The cosmopolitan nature of AFMC was also reflected in the nature of dishes available at the various canteens on the campus. From mouth watering medhu vadas to the steaming rajma chawals the canteen had it all. It was an assortment of dishes suited entirely for the palate.

The innovative amongst us found the canteen a great place to study. Unmindful of the clattering of cups, shouting of the seth we would immerse ourselves headlong into our Bailey’s with just one motive of beating the Final MBBS exam. Café Coffee Day’s punch line “ A lot can happen over a cup of coffee” often used to come true in the canteen. Many great love stories started and ended over a cup of coffee.

With multiple canteens being the rule of the day at AFMC many of my friends had a fixed schedule wherein they would give a flying visit to all the three ones. The mid way canteen was one popular joint with the Girls hostel being a mere 100 meters away it did provide one with a great vantage point. For all those of us interested in bird watching midway was the place to be in. It was a feast for the eyes as well (Pun intended).

Canteens used to help a lot in increasing camaraderie between the under grads and the post graduate students. Many of our seniors would invite us for a cup of coffee and share their college days with us. Nothing had changed, only time had flown. It was over to the canteen once again.

My experience with the Thadi is quite limited as it was only during my internship that I was a part of RNT Medical College. During this period Thadi was a place one looked to for getting some valuable tips from seniors who had made it in the P.G. Entrance. The focus had shifted from one of joyful escapades to that of serious business – the P.G entrance. One would also devise new ways of maroing Furlough so as to study for the exam. Majority of the discussions used to be regarding the P.G exam. How times had changed. Thadis used to serve as place for the seniors to indulge in a friendly ragging encounter with the freshers. After the ragging session was over the seniors used to throw a party for the fresher students.

Residency brought with it’s own share of newer experiences, the hurried gulping of coffee so that one didn’t get late for the morning rounds. Jodhpur was one place wherein one could get really spicy mirchibadas enough to open up all the faculties of the body. The steamingly hot mirchibadas and the sugary jalebis did provide the first year resident with all the necessary dose of carbhohydrates and proteins one needed to survive the tiring travails of residency.

Since I have always been an early riser in my life it wasn’t unusual for me to visit the canteen for a cup of coffee at six in the morning.  Coffee with two Khari biscuits was the breakfast many a times. Very often or not I found myself surrounded by relatives of patients trying to enquire about the child’s health. At times I used to get flustered at this invasion of my privacy but slowly I could see their point of view as well and started enjoying the morning conversations with them. I was sometimes embarrassed at the attention showered on me by the attendants. Remember the houseman is one who remains in the ward the maximum, so it wasn’t quite long before the attendants used to look up to me as the knight in shining armor. Canteen also served as place to break the ice between residents in pediatrics and gynecology. It wasn’t long before having a cup of coffee with our counterparts in the gynae dept became a routine.

Time has flown by, the rustic charm of the Thadi being replaced by the hot coffee in the doctors duty room. The canteen is not merely a building but is an entity. Many medical students have spent their time in the canteen and many would do so in the future. It’s more than structure it’s an entity by itself.

(The writer is an alumnus of Armed Forces Medical College, Pune, currently working as a pediatrician in Udaipur, Rajasthan)

For an interesting interpretation of tam bram click the URL below: