To ANCHOR A CLOUD 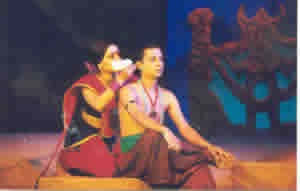 Stagebuzz in association with Pierrot’s Troupe  presented a reading of a historical play To Anchor a Cloud by the Internationally acclaimed Historian and Journalist Dilip Hiro. The Play was directed by Manohar Khushalani. The Cast Included S. Somasunderam, Manish Manoja, Mala Kumar, Joya John and Sanyam.  The 1st reading / enactment was performed at Alliance Francaise on 28th Feb and the next public reading was at Akshara Theatre on 2nd March.  The play received rave notice in the press (For details click the (Press) button in the menu row. The story is about the intensely complex romantic relationship between Shahjahan and Mumtaz Mahal and the power struggle for the throne of the Mughal Empire after the death of Empror Jehangir. Amongst the many plots and subplots the play also examines Shahjahan as the Architect builder and Mumtaz Mahal as the brain behind Shahjahan. Dilip Hiro is in India to promote his latest Book Blood of The Earth: The Global Battle For Vanishing Oil Resources, published by Penguin India. During his lectures he has often quizzed his audience about what they know about Mumtaz Mahal. Most people don’t know much beyond the fact that she was a ravishing beauty and that she died in child birth . Dilip has fleshed out the personality of Mumtaz Mahal about whom nothing much has been written in History.

Dilip Hiro was born in the Indian subcontinent, and educated in India, Britain and the United States, where he received a Master’s degree. He then settled in Britain in the mid-1960s, and became a full-time writer, journalist and broadcaster. He has published 30 books and contributed to 16 more.

He has written extensively for stage, television and cinema. To Anchor a Cloud, his three-act stage play about the struggle for power by Mumtaz Mahal and Shah Jahan, and the concept of the Taj Mahal, was produced in London in 1970, starring Saeed Jaffrey, Jamila Massey and Mrac Zuber. It was published in 1987 as part of Three Plays. The other plays in the collection wereApply, Apply, No Reply, written originally for BBC TV and broadcast in 1976, and A Clean Break, a one-act play performed in 1978. He scripted 10 of the 21 episodes on the BBC TV’s drama serial Parosi, centered round the lives of South Asian immigrants in Britain, broadcast in 1978-79 and repeated a year later.  He is the co-script writer of A Private Enterprise, a story of a young Indian immigrant in Britain trying to become a successful businessman, which was judged the best British film of 1974, and won prize at the Chicago Film Festival. .In 1985 he wrote The Video Wicked, a  stage play for the Royal Cur Theatre, London, for young audience. The Asian Cooperative Theatre, London,  presented a staged reading of his three-act play, In Search of Lord Clive’s Corpse in 1993.

As the play, To Anchor a Cloud, is set in the seventeenth century India a brief description of the Moghul dynasty, which then ruled the country, should help understand and appreciate it better. Jahangir was the Emperor of India from 1605 to 1627. He had four sons ‑ Khusru, Parwez, Khurram and Shahriyar ‑ in that order. Shah Jahan (literally, ‘Ruler of the World’) is the name that Prince Khurram acquired when he finally won the imperial throne. However, for the sake of simplicity, the authorI has used the name Shah Jahan throughout the script. Since the Moghul dynasty lacked the tradition of the eldest son automatically succeeding the father, rivalry for the throne broke out during the ruling emperor’s lifetime. This happened in the case of Jahangir and his sons. In 1618, when the play opens, the fight for the imperial throne was already on.

“The main outline of the play is faithful to history. But to make drama out of history a playwright has to distort and recast some facts and events, and invent others, and, says the author,  “I have done so.”

Regarding the main characters, Dilip has visualised them thus:

Jahangir: (Manish Manoja). Moody with a quick changing mind; yet shrewdly aware of the interests of his Empire.

Nur Jahan: (Joya John) Favourite wife of Jahangir. Domineering. Given to  intrigue in her later days.

Mumtaz Mahal: (Mala Kumar / Joya John) Favourite wife of Shah Jahan. Devoted  to her husband without being servile or overbearing.

Asaf Khan:(Manish Manoja) Father of Mumtaz Mahal, brother of Nur Jahan. Flexible except  in his unswerving loyalty to Mumtaz Mahal, and thus to Shah Jahan.

Parwez: (S. Somasundaram / Manohar Khushalani). Stout with a bland, clean‑shaven face. Slow in his movement and wits; but has zest for enjoyment.