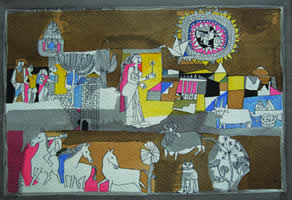 The graphic art of Mitranand has alternated between acute observation and lyrical invention. Indeed he has achieved a body of work in the graphic arts which consistently parellels their imagery in what are thought to be the graver media of tempera and ink. Mitranand Maithani, a gifted painter was born in 1933 at Baingwari in the lap of Pauri Garhwal. After completing his education at Messmore College he moved to Simla to earn a living. Destiny brought him closer to Mr. Parasher a renowned master and the architect of a new generation of promising painters. Mr. Parasher saw in him promise and the potential of a genuine painter eager to learn. Soon after joining the college of Arts in early 1952 he revealed his class by being awarded the merit scholarship which he retained till 1957. He had the rare distinction of learning under the able guidance of the noted Gurus like Mr. Pran Nath Mago, B. R. Rattan, N. K. Dey & Raman Trivedi. He came out of the college with flying colors and rare distinction. Mr. Parasher lent a big hand in shaping him to what he is now. Mitranand Maithani’s early work is characterised by conservative development in water colour as he states “My primary source in painting comes through my teacher Prof. B. R. Rattan, a noted water colourist.” Later he fused all his experience into a highly personal style. Late in 1960, Mitranand came out to be a prolific painter of primitive sub-conscious and automatism. His major interest and involvement in graphics has been and continuously to be a deep interest in nature and landscape elements, architecture and the human figure placed in a real and tangible space. These have always been the complimentary focal points of Mitranand’s absorption in exploring the potentials of colour elements in combination with black and white. He fused to paint directly, with warmth and gusto and in doing so restored to genre its spontaneity and its essential truth. Furthermore it was generally conceded in our aesthetic theory of the time that the painter had the right to alter nature for the expressive effect and to distort visual reality in order to give it emotional meaning. His new dramatic quality often turned into melodrama, and his passionate inwardness places him in the small company of authentic visionaries. His most characteristic subject, however, is world of sub-conscious mind, to be the cityscape, its people or else, sometimes the abstract pattern of the city rather than the life of its inhabitants that moved him. His unpeopled canvases have the strength of understatement, a feeling for design that is both sensitive and profound, and a mute poetry of colour. In the recent years, he enjoys himself free in subject and time for he is a painter of inmost subjects who finds no ready made images in nature but must create them from his own deeply pondered ideas, whether of a man’s character or the significance of religious experience. His works are like his life, bereft of complications and showmanship. Maithani’s work runs like a strong and steady stream, skirting all the obstacles of prevalent fads and fashions after many years of graphic activities. There is no let up, no signs of battle fatigue, no lack of new ideas

2006 Honoured by the then chief minister N. D. Tiwari for contribution in culture

1955 Annual Exhibition of The ColIege of Arts (First Prize)

Exhibition of drawings and paintings through the years