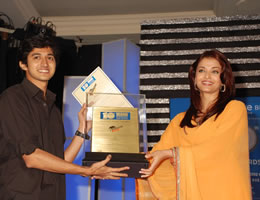 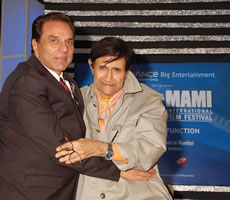 Mumbai, Mar 31: Veteran actor Dharmendra received the Lifetime Achievement award and Rishi Kapoorwas acclaimed for his significant contribution to cinema for over 35 years at the concluding ceremony of the 10th International Film Festival, Mumbai.

Acknowleding this recognition, Rishi said at the function last night, ”Usually, film industry personalities do not reveal their age but I want to say that I have not been working for 25 years I have been working for 35 years and I am proud of that.”

The First Global Lifetime Achievement award was given to Carlos Saura, a renowned spanish filmmaker, while lyricist-filmmaker Gulzar was conferred the award for outstanding contribution to Indian film music. ”Each artist needs this kind of reassurance to prove that whatever he has been doing is right” Gulzar said after receiving the award.

Speaking to newsmen Mumbai Academy of the Moving Image Festival Chairman Shyam Benegal expressed confidence that this festival had now come to stay in the metropolis and this edition had been better than the previous ones.

A total of 140 films from 45 countries were showcased in the Festival held from March six to thirteen. They included 92 films showcased in the Global Vision section. The foreign and Indian retrospectives were devoted to films by Andrej Wajda and Ritwik Ghatak respectively. The country in focus was Chinaand the filmmaker in focus was Carlos Saura.

The Kodak award for technical excellence in sound recording was presented to Hitendra Ghosh who has been in the industry for more than 25 years and has worked on about 1800 films including all of Benegal.

In a new concept called ‘Dimensions Mumbai’, five-minute films based on different aspects of Mumbaiwere showcased by aspiring filmmakers under 25 years of age. A total of 82 entries had been received for this section. ‘Vapsi’ by S Srinivasan on the hardships a young aspiring actor faces in Mumbai bagged the top prize while Aishwarya S got the second prize for Mumbai Half Marathon and Ganesh More bagged the third prize for a film on Life in Mumbai.

The awards carrying cash components of Rs 100,000, Rs 30,000 and Rs 20,000 were sponsored by Mrs. Jaya Bachchan and given away by her daughter-in-law Aishwarya Rai Bachchan. The special jury awards were given to ‘Handful of Sky’ by Neha Singh and ‘Patri’ by Akshara Prabhakar. Renowned filmmaker and cinematographer said digital technology had done away with the ‘caste system’ in filmmaking and anyone could now make films.

In the Indian feature Film Competition, Darsheel Safary was awarded for playing the dyslexic child Ishaan Awasthi in ‘Taare Zameen Par’, Swathee Sen for playing Janki in ‘Antardwand’ while both the Best Film and FIPRESCI (International Federation of Film Critics) awards were bagged by the Marathi film ‘Tingya’ by Mangesh Hadawale on the delicate issue of farmers suicides. ‘Frozen’ which is the first full length feature film to be shot in Ladakh won the Special Jury Award for its director Shivaji Chandrabhushan.