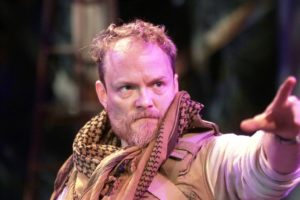 The Play
Aided by two Muses, a single, modern day storyteller takes the stage—possibly Homer, possibly one of the many bards who followed in his footsteps. He retells Homer’s classic tale of the Trojan War – The Iliad, specifically focusing on the story of the great fighters Achilles and Hector. As he shares his tale with a modern audience, references with wars throughout the ages collide with the ancient story of Greeks and Trojans. As a traveling storyteller, he uses poetry, music, humor, and poignant accounts of war to share the experience from the perspective of a fighting Greek soldier and a poet, a tale he is fated to tell throughout time.

Director’s Note
The Iliad is the foundational epic of Western civilization — all of our basic ingrained beliefs about men and women, the role of the individual to the group; duty to country/tribe vs. duty to individual/family; what is just and correct action when faced with injustice and corruption —are brought wonderfully to life in The Iliad. This production brings these thrilling questions to a very human and relatable level in an easily digestible evening of theater. The audience will leave with a keen understanding not just of the story of Achilles and Helen of Troy but also hopefully with a renewed hunger to think about and address the timeless questions in their own lives. The phenomenal original score by Patrick Neil Doyle, lifts the entire experience and transports us back 2500 years ago to the plains of Troy making us feel that we are there with the great people of legend.

The Directors
Guy Roberts – Artistic Director of Prague Shakespeare Company, Guy won the 2018 Best Actor Houston Theatre Award for his performance of The Poet in An Iliad. He is a 2015 recipient of the Tomas Garrigue Masaryk Medal of Honor, in recognition for his work promoting arts and artistic freedom. In 2014 Guy received the inaugural Sidney Berger Award from the Shakespeare Theatre Association. His award-winning work as actor, director and producer has been seen in over 200 productions in the United States, Czech Republic, France, the Netherlands, Hungary, Austria, Slovakia, Poland, Qatar and Egypt and has been honored with multiple awards. Guy served as Artistic Director of the Austin Shakespeare Festival (USA) from 2001-2007. He received his BFA from Boston University. Guy resides in Prague, Czech Republic with his wife, the actress Jessica Boon.
Rebecca Greene Udden- co-Director An Iliad and Founding Executive Artistic Director of Main Street Theater Company located in Houston, Texas USA. Some of her major works as director are- Enemies, Wolf Hall and Bring Up the Bodies (First American Productions), Twelfth Night (Prague Shakespeare Company), Silent Sky, Peace in Our Time, Heartbreak House, The Real Thing, The Heidi Chronicles, Arcadia, The House of the Spirits, Copenhagen, The Little Foxes, Pride and Prejudice, and many more. She is also a celebrated actor Memory House and Richard III are two such productions of Prague Shakespeare Company in which she acted. Her some other acting assignments have been The Last Night of Ballyhoo, The Sisters Rosensweig, Hapgood, Hamlet, and more. She has also designed costumes of numerous productions.

The Playwrights
Lisa Peterson is a nationally renowned director who works in NYC and regional theatres around the USA. She was for ten years Resident Director at the Mark Taper Forum. She won an Obie Award for her direction of Caryl Churchill’s Light Shining in Buckinghamshire at New York Theatre Workshop.
Denis O’Hare is a writer and Tony Award-winning actor who has performed on Broadway and off-Broadway as well as in numerous regional productions and in film and television. His TV work includes roles on HBO’s True Blood and FX’s American Horror Story.

Based in Prague, Czech Republic, the award-winning Prague Shakespeare Company presents professional theatre productions, workshops, classes, lectures and other theatrical events of the highest quality, conducted primarily in English by a multinational ensemble of professional theatre artists, with an emphasis on the plays of William Shakespeare. Celebrating its 11th year, PSC has entertained, enriched, enlightened and inspired students and audiences not only in the Czech Republic but in the United States, Hungary, France, Egypt, Qatar, the Netherlands and elsewhere around the world with performances that are fresh, bold, imaginative, thought-provoking, and eminently accessible, connecting the truths of the past with the challenges and possibilities of today.