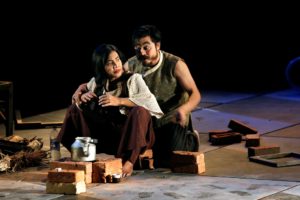 The Play
Sarachi relates to Ota’s many preoccupations; dispossession; wandering; a search for connectedness; questioning, comforting and reaffirmation of reality. Likewise, Sarachi contains virtually no socio-political themes as reference points, as Ota searches for a philosophical understanding of life and human relationships on what he evidently perceives a universal level. The ideological vacuum in which the play seems to operate might strike some western readers as swimming against the tide of times. No matter how one judges Ota’s recent work in this regard, it is overtly apolitical. As such, it is in step with much contemporary Japanese drama. Sarachi involves much hauling, pulling and crawling. It is a work that offers both a preliminary look at Ota the playwright and a more rounded picture of Ota the theatre artist. The play reveals a middle aged couple forced to come to grips with a sense of ennui that has fallen over their lives, a fact represented literally by the sudden disappearance of their house. Wife and husband push, pull, drag and crawl their way through the theatre-space and their lives embark upon a search for the meaning of reality.

Director’s Note
To go from place to place is a species-specific instinct among humans. What is at the back of it? This is the object of exploration in this play. People’s search for a dwelling place and its directly opposite impulse to abandon it is ordained in the pages of the Vacant Lot. In this course of a to and fro ticking in a pendulum – like fashion there is a movement of universal phenomenon. Reciting a human desire for- sex & marriage, children & home, job & income. Residing within the bowels of ‘location’ is a lingering boundless and endless wandering lust that shies away and beyond! Inspired by a simile of a constantly ticking pendulum from left to right in search of? Like a hapless kinetic energy propelling towards actions that behove in the horizon perhaps. Or mostly like spiralling into depth from heights! An abstract – turn and twirl – like art.

The Director
Apoorva Anagali started her theatre carrier as a child actor from Koshika cultural organization and Benakamakkalanataka Kendra (headed by B. V. Karanth and Prema Karanth). She trained in Carnatic classical music and Bharatnatyam in both Kalashetram and Valavur styles. Has trained in make-up and mime workshop, NSD. She debuted as a director with B V Karanth’s Heddayana. She has acted in almost 25 plays and directed eight. She pursued a – year long diploma course in Neenasam theatre institute. Has experience of participating in international theatre festival of India like Jashne Bachpan, Bharat Rang Mahotsav, Multilinguistic Theatre Festival – Kerala, Tamilnadu, Pondicherry, Mumbai and Goa.

The Playwright
Ota Shogo (b.1939) is one of the notable artists to emerge from the new Japanese theatre of the 1960s. His work received recognition in Japan in the 1970s and he gained an international reputation in the 1980s. To a great extent attention outside Japan has been received for his wordless theatre pieces, such as Water Station which consists of extremely slow, mostly silent movement. From the beginning of his carrier, Ota has relied heavily on works structured on dialogue. First published in the theatre magazine Teatoro in February 1992, Sarachi (Vacant Lot) is his latest example of work. Ota has ever since been associated with Tenkei Gekijo (Transformation Theatre), he found in 1968 also marks a new phase of his involvement in theatre.
Currently he functions as an independent artist and an artistic director of the new Civic Theatre, a municipal theatre in the Tokyo suburb of Fujisawa.

The Group
This play is a part of National School of Drama’s graduate showcase of class 2018. It aims to provide a platform to encourage emerging theatre practitioners to share their work with wider audience.