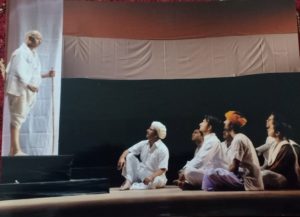 (Based on Mahatma Gandhi’s book)

Why Hind Swaraj? Anybody can ask this question. Why is this book that was written in the first decade of 20th century being presented in the second decade of 21st century- an era of ultra-modernity? Did we receive the independence that Gandhiji dreamt of? In the name of independence blacks have replaced the white. Independence does not mean just a change in government, but a change in the overall lifestyle. It is like preparing a new land for the struggle for human values. This is why Gandhiji spoke of removing the English culture. He did not want the western influence on Indian land. But this is exactly what has happened. The rulers have changed, the vision has not. The generation born after independence is unaware of the freedom struggle undertaken by our ancestors.

We have tried to present this struggle through the play. It is an effort to convey Gandhi ji’s dream to the young generation, which he saw for the freedom of India in 1909. He was then in South Africa carrying out the Satyagraha. In this presentation Gandhiji has indicated the danger of the imposed western civilisation on India. This book can also be called a discussion on civilisation. Our production investigates the propaganda that the British worked for the so-called development which, on the contrary, was for the benefit of power.

What a dilemma it is that the youth of India, although familiar with the name of Gandhi, is unaware of his vision. I hope that the society understands his principles of truth, non-violence, love and Satyagraha through this play. The whole world considers our values eternal but we disregard them.

The book, along with creating the context of Satyagraha Andolan, also gives us a glimpse of India’s freedom struggle. I hope that this production will be successful in establishing Gandhi’s vision in the society.

Based on the book ‘Hind Swaraj’ by Mohandas Karamchand Gandhi