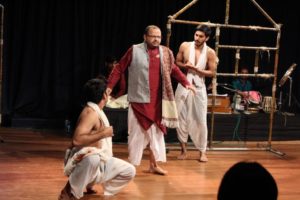 This play depicts the story of the transformation of rats into humans and humans into rats. ‘Garibprasad’ has been given the task of killing the rats but instead of killing them he brings the two rats (Harus and Marus) to his home. The two rats befriend Garibprasad’s daughter ‘Laali’. Harus Marus get to know that the ‘Malik’ is exploiting Gareebprasad and he doesn’t even have money for her daughter’s engagement. Harus Marus decide to help Gareebprasad. But in the process Gareebprasad gets convicted for the crime that he didn’t do. And in all these chaos Gareebprasad realises that he is living the life of a puppet and everybody is pulling his strings as per their wishes and that it’s better to be a rat than being poor.

Harus-Marus is an original contemporary play which unveils the parochial nature of human beings. We live in such a time where human life is of mere value. Our daily struggle for existence is even inferior than the life of rats. The widening inequality in our society forces a larger portion of population towards the silent epidemic of hunger. Their misery is not only restricted to food but they also don’t have the right to live freely. Harus-Marus is a satire where the writer literally creates a mob of rats in searching for food and has two mice which speak human language. In a humorous satirical way, the play takes us into the realms of poverty where the poverty-stricken human being is compelled to choose a life of rat over human life. In juxtaposition, rats help the poor to get justice.

Rasika Agashe is NSD graduate in acting. She has been an actress, a director and a writer for both TV and theatre. Currently she is working in Hindi, Marathi and English theatre. Her plays have been staged in all major festivals across India. She has directed plays like Masti Mein Romeo Juliet, Iss Kammbakht Sathe Ka Kya Karein, Eidgaah, Collaborators, Museum of Species in Danger, Andhere Ke Romeo Juliet, Sat Bhashe Raidas, Maranat Kharokhar Jag Jagte, Raat Na Aaye, Hum Panchi Lahron Ke and Harus Marus. And has acted in Apna Apna Bhagya, Laila Majnu, Baghdad Burning, Popatpanchi, Wedding Album, Sadu Saduchi Bayko, Gholat Ghol, Museum of Species in Danger and Harus Marus.

Mukesh Nema was born on 21st March 1976 in Sagar, Madhya Pradesh. He did his primary schooling from Dabalchowki village in Dewas district. He then did M.A. in Hindi Literature from Devi Ahilya Vishwavidyalaya Indore. He is a diploma holder in film screenplay writing from FTII Pune. From his school days, he has been active in theatre, has directed and acted in many popular plays. He has also written more than 15 plays. His one- act plays Matamma and Kabeela were honored at State and National Level. Presently he is writing screenplays and dialogues for variety of Hindi television shows.

Being Association is a group formed with the sole purpose of theatre development and education. Social awareness through theatre is also one of the main purposes of Being. Mumbai, which has always been a cultural hub of India, which gives opportunity to all getting attracted to this entertainment port, allowed us to create and stage our theatrical concepts in very creative form. In this commercial environment of our entertainment Industry, it becomes very necessary to experiment and explore theatre, through reading our rich literature, and general awareness about social political conditions.