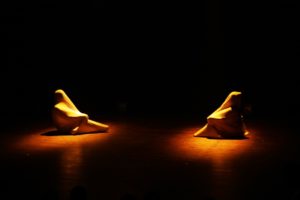 About the Play
This is the story of the journey of a sperm and an ova. They get together and make a child. Be it a girl or a boy, the sperm and ova do not discriminate – same power, same energy and same hope. Just a different gender in the world. And then? Pink for the girl and blue for the boy which they never ask; car for the boy and doll for the girl which also they never ask. We divide them. We make different laws and rules for each. Then comes puberty!
In Sri Lanka we care so much about our ‘nationality’, but do not care about the nation of our girls. As an Asian country, our society is concerned more about the virginity of girls than the girls themselves, more about their discipline than their life, love or hope. Puberty makes it worst. This play talks about the difference in the life journey of a baby girl and a baby boy.

Director
Sachithra Rahubadda is an active director of children and youth theatre in Sri Lanka. He began his study of theatre at school. He began producing plays while still in school and later did a Diploma course in Drama and Theatre at the Institute of Sinhala culture, and then a Diploma in Script writing and Communication at the University of Sri Jayawardenapura. He obtained his BA degree in Drama and Theatre from the University of Kaleniya. He conducts workshops and stage shows in schools around the country, as a result of which Red Apple Theatre Gathering was founded. He gives the children and youth of Sri Lanka necessary training and makes all the effort to bring their talents forth. Many of his students are contributing in many creative fields throughout the country.

Director’s Note
Children’s world is totally different from that of the adults. It is difficult to understand them. Our interpretation of children’s imagination can be erroneous. Puberty reveals the modern children – instant and innovative. But with roots that are cultural and social. Within the Asian cultural background, life circle of two new born children is the theme of the play. The structure of the production is modern, choreographic, non-verbal and musical.