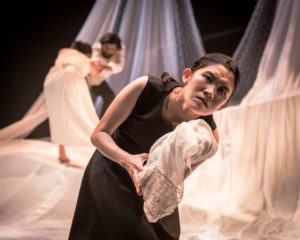 The play consists of a few final episodes from the life of an ageing sculptor, who achieved fame at the expense of personal happiness. The artist in his old age has lost his inspiration, he wanders around aimlessly, has stopped producing art works and his marriage with his young wife is at the verge of a breakdown. He comes across a deranged stranger lady, who claims to be dead. He comes to realize that the strange lady was once his muse and model to his most famous work of art. His interests were only artistic while she suffers a certain death of soul due to the unrequited love. His wife breaks free from him to find life and love in a bear hunter, while the artist and the model dredge up and dig through a difficult past to realize that the life they led is irretrievable.

The questions are, why should we care about this play and the characters today? And how do we approach them? The answer to the first question, I think, is that these characters are like us, in their selfishness, denials and egos. My answer to the second question leads to another difficult question and is rather harsh. What if we deny the author his words, his rhetoric, the way the sculptor denies acknowledging a life beneath his model which then turned her into a statue! And when we do that to this play, we are left with a phantasmal envelope of silence where bodies move like ghosts and speak their silence. This might start to provoke our imaginations beyond the spoken, and we might start to see the irretrievable. We may begin to ask questions such as- are we awake? Are we dreaming? Or, are we dead? Do we need to wake from the dream or death? What happens when we dead awaken?

Sankar Venkateswaran is a theatre director and dramaturg from Kerala, India. He graduated from the Calicut University School of Drama and Fine Arts, and pursued his post-graduate training at Theatre Training and Research Programme (now Intercultural Theatre Institute), Singapore. Currently, Sankar has set up a cultural space in Attappady, Kerala, and works with the indigenous communities of the region. He is a recipient of the International Ibsen Scholarship 2013 (Teater Ibsen, Norway) and Ustad Bismillah Khan Yuva Puraskar 2011, and was a jury member for Zurich Theater Spektakel 2016.

Henrik Ibsen (1828-1906) was a Norwegian playwright, theatre director, and poet. He is considered by many as the ‘father of realism’ and remains one of the most influential playwrights of his time and is the most frequently performed dramatist in the world after Shakespeare. Ibsen’s dramas have a strong influence upon contemporary culture, and continue to be staged in different languages around the world today.

Jangama is a collective of five actors/performance-makers that strive to create work that may speak across cultural and linguistic barriers through their own forms and languages. The collective comprises of Lakshmana KP (India), Pooja Mohanraj (India), Hau Guei Sze (Malaysia), Caroline Chin (Singapore) and Alexander Beard (Australia). The five have been undergoing training at the Intercultural Theatre Institute in Singapore, an actor training institution that focuses on immersing actors in both Western and Eastern theatre forms. Each of them is working as independent artists in their own countries, while continuing to connect with each other and create work around the world.