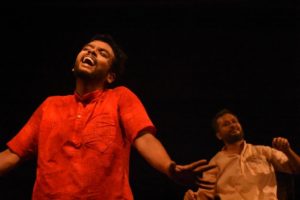 The Play
The story starts with a pregnant lady taking her dying husband to the hospital by pulling a rickshaw on her own. But the hospital refuses to treat him and finally he dies. The pregnant lady cremates her husband and takes shelter on the footpath. The night guards of the city rape her repeatedly and one night she bites their sex organs! After a few days, Rabi, a rickshaw-puller, hears a baby weeping in a pile of garbage. He adopts the abandoned baby and names her Pari. He has now found a motive to live…. in bringing up Pari.
Time passes. Now, Pari is a mother but she surrenders her little son, Bodhisotwo, to Rabi’s custody and disappears. Rabi raises Bodhisotwo and leaves behind him a stable along with poor pets – an unfledged parrot, a lame cat, etc. Will Bodhisotwo’s life maintain an undisturbed flow with these pets? Will the roads of our city allow him to grow up as its citizen? Will he be able to live alone…?

The Director
Rudraprasad Sengupta was born in Calcutta (now Kolkata), Bengal. He studied at the Scottish Church College of the University of Calcutta where he earned his B.A. and M.A degrees in English literature. He was formerly a reader in English at the Brahmananda Keshab Chandra College, Calcutta, and a visiting lecturer in the Drama Department of Rabindra Bharati University. In 1961 he joined the Kolkata-based theatre group Nandikar and in the early 1970s started to direct several plays for the group. In the late 1970s he became the leader of the group. He has directed many plays for Nandikar including Football and Feriwalar Mrityu among others. He has also appeared in some Bengali art films, Bernardo Bertolucci’s Little Buddha, and Roland Joffé’s City of Joy. He has received numerous awards to include Best Actor and Director Award from Theatre Journalists Assn. (W.B.) in 1975 & 1976, Best Director’s Award from Critics’ Circle of India in 1979, the highest national award from Sangeet Natak Akademi in 1980, Girish Award as Eminent Theatre Personality in 1980, Senior Fellowship, Department of Culture, Government of India (1984-1987 & 1996-1998), Kalakar Award as Best Actor in 1997, Carey Award for life-long contribution in 1998, Natya-Swapna-Kalpa 2000, Dinabandhu Puraskar in 2006, B V Karanth Samman (Bhopal) in 2007 and many more.

The Playwright
Saptarshi Maulik is presently the Assistant Treasurer of Nandikar. He is also a Training Assistant in Nandikar’s In- House Training and Theatre-in-Education Programmes in schools. He has worked with the inmates of Dumdum Central Correctional Home; students of IIEST, Shibpur; students of Seth Anandram Jaipuria College; and the students of IMI, Kolkata. He has acted in Nandikar productions and is the author of four plays.

The Group
Nandikar is a 56-year-old institution which has been at the forefront of the national theatre movement. Nandikar has participated in International festivals in the New York Fringe Theatre Festival, Bonn Biennale, four festivals in Sweden, and the London Nehru Centre and Edinburgh Festival in the UK. It has interacted with Universities of New York, California, and Riverside; Brecht Zentrum, FIRT and a number of ITIs in various countries. It has worked with the Ministries of Culture, Youth Affairs and Sports, Women and Child Development, and Human Resource Development (Department of Education); and also with the Sangeet Natak Akademi, Sahitya Akademi, National School of Drama, Indian Council for Cultural Relations, and the Indian Council for Social Science Research.