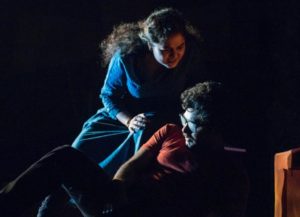 The central point of the play 21 Grams or Ekush Gram is an accident around which revolve three families and lives of a few individuals. The sequence of events spins simultaneously from the past to the present and back to the past. These circular motions embody individuals merged in emotions of love-affection, lust-violence, despair-dejection, and wide-ranging gives and takes. Under the same kiosk, into the varied complexities of life penetrate many heart pulsations lub-dub..lub-dub..lub-dub…….. A compelling and unbearable rhythm of lub-dub…. this is an endless tremor. Its harmonious impact signifies the mysterious beauty of life. Barely 21 grams lub-dub..lub-dub..lub-dub..lub-dub…

Naihati Bratyajon was established with an aim to present films rich in creative and theatrical content on stage. For theatrical presentation, they had resolved to choose from films produced in Bengal. The first play staged in this design was Meghe Dhaka Tara. The play premiered at University Institute Hall on 2nd January, 2016. The premier show of the second production Ekush Gram is planned on 26th March 2017 at Mohit Moitra Mancha, Paikpara. This play is based on the second film of Oscar winning Mexican director Alejandro González Iñárritu, titled 21 Grams. The essence of this theatrical production is to make the two islands of theatre and film to become mutually relevant in the great ocean of art.

Bratya Basu, is an accomplished theatre artist, a playwright and director. Basu launched his career as a dramatist and director with the play Ashaleen (1996), described by theatre critics as the first post-modernist Bengali play. His noted plays (as playwright, actor and director) thereafter include Aranyadeb, Shahar Yaar, Virus-M, Winkle-Twinkle, 17th July, Chatushkon and many more. Basu has bagged many awards and recognitions both in Theatre and Film. Some of them include Hyderabad Bengali Film Festival Award, Ritwik Ghatak Honorary Award, Kalakar Award, Shyamal Sen Memorial Award, Dishari Award, Satyen Mitra Award, Shilpayan Samman, Srestho Natya Nirman etc. Bratya Basu, is currently Hon’ble Cabinet Minister and in charge of the Ministry of Information Technology & Electronics for the state of West Bengal. He has created his own space in contemporary theatre by moving beyond its existing boundaries. He formed his own theatre group Bratyajon in 2008. The first theatrical production of Bratyajon was Ruddhasangeet (2009) which has so far staged more than a record 150 shows to packed houses.

Ujjwal Chattopadhyay is a professor of Economics and an eminent playwright of West Bengal who has been serving Bengali theatre for decades. Most of his plays have been produced by directors like Bibhas Chakraborty, Meghnad Bhattacharya, Bratya Basu, Soumitra Mitra, Kaushik Sen, Prokash Bhattacharya and others. Some of his remarkable plays are Akarik, Antaral, Bhrom, Antoni-Soudamini, Arabyorajani, Biley, Drohokal, Dhrubatar, Nati Kiranshasi etc. He has also adapted the works of Chekov, Tagore, Shakespeare and Kalidas.

We have formed Naihati Bratyajon by merging all the theatre groups of Naihati. On the suggestion offered by our respected playwright and director, Bratya Basu, we have decided to stage plays based on popular movies carrying social messages. Our first production, Meghe Dhaka Tara, is a well-known film of Ritwik Ghatak. We will produce several such film productions on stage in the future and present them to theatre lovers.