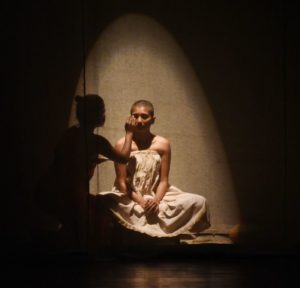 Karuppu is a dance-drama representation of the movement of Purusha and Prakriti energies through the birth, destruction and rebirth of the universe. The separation of Purusha from Prakriti destroys the universe; but the destruction is not permanent as nothing is. Only in the powerful destruction of the world and all its constituent materials and forms, by Karuppu (Dark) energy, is the reunion of Consciousness and Nature possible, giving rebirth to all of existence. Karuppu depicts a universe absorbing all imbalances making itself a black hole from which rebirth of everything anew is possible.

Karuppu, this is the black spot that we put on the cheek of a newborn. . .

Karuppu, is the nocturnal silhouette that will try to seize us at the corner of a deserted street. . .

Karuppu is the spirit that keeps the man alert. . .

Karuppu is the goddess Kali, the ultimate form of energy, the one needed to destroy everything. . .

Karuppu is also a world without God, without a creator, without the paternal guru omnipresent where the Man, alone in the face of his destiny, learns to tame the dark forces.

Karuppu is not evil but the darkness contained in him of whom he is wary, he conjures the hold through rituals. . .

Karuppu is the vision of a world born simply from the union between Pakriti (the feminine) and Purusha (the masculine). This union between energy and consciousness, dynamic of a whole universe is as fragile as the relationship between man and woman. . .

In the form of a dance-theatre we make and break the bonds that unite Purusha (the man) and Pakriti (the woman) through mythical characters including Iphigenia, Ophelia, Clytemnestra, Medea and Kali.

Koumarane Valavane, a Franco-Indian, who left for France in his early years for studies, started practicing theatre at a very young age. In the University of Marseille, he along with his friends created a cultural association which was called Centre Culturel de Luminy, and which made theatre its primary element. After completing his research in Theoretical Physics, he founded his own theatre company Natya. For 3 years he worked as an actor at Theatre du Soleil, the renowned theatre company in Paris, before returning to India in 2006. With the rich experience of contemporary theatre gained in France, Koumarane returned home with a decision to continue exploring theatre at home. His thought began to spread its roots when he met a few young people at Alliance Francaise de Madras. This small group connected by the passion to do theatre, decided to form a theatre group and created Indianostrum in 2007.

Indianostrum Théâtre was founded by Koumarane Valavane, a French-Indian director in the year 2007, along with few young actors who were ready to gamble their flourishing careers in conventional fields for their passion for theatre. Indianostrum’s core aim is to expand the role of modern theatre in the cultural life of the country, by developing new modern texts, finding the specificities of Indian modern theatre, exploring its relationship with traditional forms, and transcending political, social and historical divides.