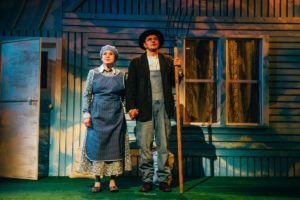 After the fall of the Iron Curtain and the collapse of the USSR, the peoples of the former autonomous republics started to look into the blank pages of their history. One of these sad topics for Tatars, the second largest nation of Russia, was the fate of the captured Second World War soldiers and officers who refused to cross over to the side of fascist Germany and passed all the hardships of Hitler’s concentration camps, and after the collapse of the Third Reich became prisoners of the Stalin’s GULAG. Those of them who were lucky enough to return home in the fifties only recently received the status of participants of the Second World War. However, there were some of them who, sensing a new arrest, did not return to their homeland and scattered all over the world…Naqip, the main character of the play, after the war, stayed in Canada by the will of fate and started his life with a clean slate. In a small town in the Canadian outback, he arranged a kind of a Tatar village, started growing potatoes and ….

Farid Bikchantaev was born in Kazaninin 1962. In 1991 he graduated from GITIS (Russian Institute of Theatre Arts) with a degree in Theatre Direction, a course run by Maria Knebeland Boris Golubosky. In 2002 he became the Artistic Director of Galiaskar Kamal Tatar National Academic Theatre. In 2011 Farid took on the role of head of the Republic of Tatarstan Theatre Union. In addition to his directing career, Farid has taught in the Kazan State Institute of Culture since 2002, first as the Head of the Acting Department, then as a Professor. Farid has also delivered two acting courses in the Kazan Theatre School.

He has received the Laureate of the Gabdulla Tukay State Prize of the Republic of Tatarstan. He was a nominee for the NationalTheatre Award ‘Golden Mask’ and is the winner of the XXII InternationalStanislavskyPrize ‘For the contribution to the Russian theatrical art development’. He is the Chairman of the Theatre Union of Tatarstan.

A prose writer, journalist and playwright Gaffarova Sumbel Gabdulahatovna graduated from the classical Tatar grammar school named after Sh. Mardzhani. Then she studied at Kazan State University (now KFU), Faculty of Tatar Philology, Literature and English. She has authored a collection of children’s fairy tales Long ago, recently …and a children’s novel A dream that will come true. She is a member of Kazan Opera Laboratory – Kazan Opera Lab. Sumbel collaborates with the youth creative organization Caleb. She writes in both Tatar and Russian languages.

Galiaskar Kamal Tatar National Academic Theatre was founded in 1906 and is the oldest national theatre in the Russian Federation. It is the winner of the national theatre award Golden Mask. The theatre is located in the heart of the city of Kazan, which is recognized as the ‘Third Capital of Russia. The repertoire of the Kamal Theatre harmoniously combines the classics of world literature and drama, and works of Tatar playwrights and contemporary authors. All performances are in the Tatar language, as is the tradition. A simultaneous interpretation of all the performances in English and Russian is also provided. Since 1998 the theatre, in cooperation with the Ministry of Culture of Russia and the Republic of Tatarstan, has held the International Theatre Festival of Turkic people ‘Nauruz’, the main theatre festival of the Turkic world. Since 2010 the same collaboration has held eponymous international theatrical and educational forums which consist of seminars, training sessions, and lectures by leading theatre professionals from around the world.

Khairullah, Head of the Concentration Camp, Captive,Military in the Cafe: Ilnur Zakirov