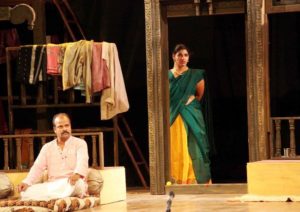 The Play
Kola is the second part (Magna Talyakathi in Marathi) in the Wada trilogy written by Mahesh Elkunchwar. It is a poignantly written family drama having its roots in the first part Wada Chirebandi. However watching Kola as an independent entity will give you an equally mesmerizing theatrical experience. Set in rural Vidharbha, the play talks about relationships, aspirations, joys, sorrows, anger, insecurity and many other human emotions which an individual from any place can easily relate to. It traces the story of three generations. It looks at how people from the older generation adapt to the ways of the new generation. The play also throws light on the lives of young people who live away from home but prefer to stay connected to their roots.

Director’s Note
Kola unveils the tales of many generations of a family along with the emotional struggle of relationships. But the conversation is not just dramatic; it also takes you to the depths of the character. I feel, when instead of acting, actors try to live their roles on stage, the intensity of the play multiplies manifold. In this production, the actors have tried to explore the emotional side of each character. We have experimented to see if the actors can be prevented from falling prey to the obsession of acting and made to perform by forgetting the fact that they are acting before an audience for two hours.  If, in each performance, the actors are able to be the characters themselves (only when on stage), the motive of this play is achieved. This is the belief and commitment of the play too. Through Kola the audience will witness the metaphorical and poetic form of the play.

The Director
Achyutha Kumar is a well-known actor in the Kannada and Tamil film industries. Achyutha received theatre training at Ninasam Theatre institute. He went on to form Protheu theatre with like-minded friends, and acted and directed a number of plays under the banner. He started his acting career in television with filmmaker Girish Kasaravalli’s serial Gruhabhanga. After a series of television serials, he started acting in Kannada films. He has acted in more than 150 films so far and has been honoured with two state awards, three Filmfare awards and a SIIMA award. He formed the team Theatre Tatkaal four years ago and has directed two plays under the banner – Nanna Thangigondu Gandu Kodi and Kola.

The Playwright
Mahesh Elkunchwar, born in Nagpur on 9 October 1939 is an Indian playwright who has written more than 20 plays, in addition to theoretical writings, critical works, and active work in parallel cinema as an actor and screenwriter. He is credited as one of the most influential and progressive playwrights, not just in Marathi theatre but also Indian theatre. He was awarded the Sangeet Natak Akademi Fellowship. His first play Rudravarsha was written in 1966.