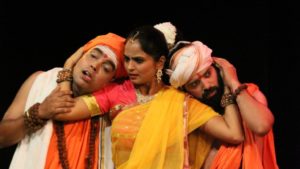 The Play
Most of the plays in Maithili language are based on the stories derived from the lineage of Lord Krishna and his characteristics. But in Dhurt Samagam a saint and his students are the central characters. Every character in the narrative is one up in cunningness from the other. The saint along with his student, Snatak visits late Thakur’s place for alms, the household people take plea of impurity due to death in family. Vishwanagar and Snatak then visit Suratpriya’s place. Here, the mentor-disciple start fighting amongst themselves for a prostitute named Anangsena. Both of them take the prostitute to Assajaati Mishra to resolve their fight, but Assajaati Mishra and his helper Bandhubanchak both turn out to be more lecherous than them. Finally, Assajaati Mishra proclaims that it is this sly nature that has helped him to con the world and obtain his beloved. It is this essential nature which is the most precious thing for him in the world. However, he says that he always hopes for the peace and happiness of the universe.

Director’s Note
Dhurta Samagam, written in thirteenth century is the first Maithili play. As Jyotishwar Thakur himself belonged to the Mithila region he placed the action of the play in same region. A seven hundred years old play is as relevant today as it was back then. This became a strong reason for us to produce it. The physical postures in our production are inspired from Sanskrit drama tradition and folk form Kiratniya.

The Director
Dr. Prakash Jha, a Phd in theatre, has been associated with theatre since 1994. He is the only director working in Maithili presently. He is the founder director of Mailorang Repertory and a senior research fellow of the Min. of Culture, Govt. of India. He has, to his credit four published works, out of these three are edited works and the fourth one is a translation. He has directed more than 30 plays and acted in more than 40 plays. His plays have been a part of Bharat Rang Mohatsav. Presently, he is working as a co-editor of Rang Prasang, a magazine published by the National School of Drama.

The Playwright
Poet and playwright, Jyotishwar Thakur is assumed to have lived from 1260 to 1340. He was a resident of Pali Village of Madhubani district of the present-day Bihar. He was an ardent devotee of Lord Shiva. He was given the the title of “Kavi-Shekar” because of his great writings. His Sanskrit text titled Panchsayak is based on ‘Kaamshastra’. His other work, Varnaratnakaar is assumed to be the best work of that time.

The Group
Mailorang Repertory, Delhi was founded in 2005 with the aim to preserve the essence of cultural heritage and diversity of Mithila region amongst the people living in NCR. Since then it had served the objective of promoting the regional art and culture such as Natua-naach, rasanchowki, kirtaniya etc. This group has presented more than 60 plays within the country and also in neighbouring states like Nepal. Several renowned artists have been associated with Mailorang with the sole objective of promoting art and culture. The plays presented by the group have been appreciated worldwide.