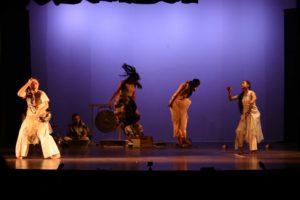 About the Group
Sampang Agung Centre for Performing Arts (SACPA) is located at Pelem village in East Java (Indonesia). The centre strives for the preservation of Javanese cultural heritage and traditions, and its members are committed to further exploration on new artistic ways of expression submerged within such heritage and also the contemporary arts. SACPA’s performers (known as Breathing Forest Dance Theatre) have been recognised by the unique movements in the choreography of their performances inspired by the day to day movements of the village and the interactions of humans, animals, spirits and nature. ‘Whiffling of the Forest Gamelan Ensemble’ is a music group formed in 2015 at SACPA. Under the direction and mentorship of the established musician and composer, Johan Adiyatma Baktiar, the ensemble offers distinctive and theatrical Javanese gamelan based music.

About the Play
A fallen leaf never hates the wind. It falls itself as it does. Never against anything, there is only sincere acceptance and surrender. Wisdom offered by the harmony of the four elements of nature – Fire, Wind, Water, and Earth – shapes the expressions and characters in the body. Nature as a human being sometimes becomes the axis of problems, while nature quietly and permanently creates peace. Lessons from the fallen leaf to understand peace – whenever it should fall it falls, whatever makes it fall, it lets it do so, and wherever it takes off, the leaf will not complain and accept what God gives.

Director
Born in 1971, Agung Gunawan is a renowned and established dancer, artistic director, choreographer and vocalist. Since the beginning of his career in 2006 as an independent solo dancer and choreographer, he has worked with many multi-disciplinary artists, in companies and projects both inside and outside Indonesia.
He was a founder and artistic director of the Arts Island Festival from 2010 to 2014, and of Pelem Festival since 2016. His motivation to create the festivals was a manifestation of his conviction that “If they are not accessible to the poor, the arts are neither innovative nor revolutionary”. This belief has been the pillar of his daily practice. Currently, he is based in the rural village in East Java, as a co-director of SACPA, and a choreographer of ‘Breathing Forest Dance Theatre’ while continuously touring numerous countries for performances and projects.

Director’s Note
After having undergone years of intensive training and performances as a Yogyakarta classical court dancer in Indonesia, I moved to the country side in East Java, named Pelem village in 2008. At first, I felt that traditional dance and theatre performance in the village had not been refined and was edgy. However, it struck me that their dance was full of energy, intensity and power of human creativity of arts. I sat in the forest for hours, searching for the meaning of the relationship between art and life, myself and nature, and nature and local people – now our people. A leaf is such a symbolic and artistic metaphor for me – it grows, and turns brown, and falls as it is. It is such a simple, peaceful life which casts a question to me. What is it behind the last moment of the leaf, not complaining and in total surrender? How does this relate to us, human beings?