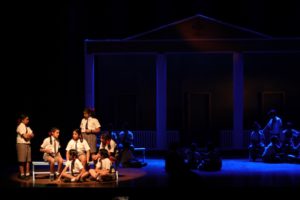 About the Group
Wings Theatre Academy was established in 2012. The aim of the academy was to give a platform to the students in and around Chandigarh, whereby they could hone their skills, grow as individuals, and work constantly to grow the faculties of their mind, while simultaneously opening up the world of theatre to a city still in the process of finding its pulse. The academy is currently 150 students strong, all of whom are in the age group of 7 to 30 yrs. The academy has staged over 20 annual plays in the last six years.

About the Play
She Stood Up, directed by Zubin Mehta, focuses on different aspects of school life. The story is about two girls who despite having different personalities and backgrounds come together, become good friends, and take little steps of courage to change people’s perspectives. They empower girls through a soccer match. It is a very simple, realistic and relatable story which comes with a strong message of motivation and courage to stand up for what is right, and of breaking gender stereotypes from an early age. While highlighting the above, it has light, innocent and humorous moments for the audience to enjoy. This play was devised with a lot of inputs and ideas from the young actors who come from various schools in and around Chandigarh. The cast of the play comprises entirely of children between the ages of 8 and 11 years, who have been training with Wings Theatre Academy at Vivek High School, over the last few years.

Director
Zubin Mehta, started his theatre journey at the age of 8 as a child artist. He travelled extensively to the interiors of Punjab to perform plays based on socially relevant topics, using theatre as a medium of social reform. In 2004 at the age of nineteen, Zubin was appointed as a theatre teacher by Yadavindra Public School, Mohali to establish a dramatics society which later became a part of the curriculum. During his tenure, he directed school productions, worked with children of various age groups and developed content for theatre workshops. In 2012, he founded Wings Theatre Academy. He has worked with more than 3000 actors – children, adolescents and young adults.

Director’s Note
The movement of Woman Empowerment has been gaining momentum in our country in the last decade, but we are still dealing with the horrors of Nirbhaya and Kathua. The real empowerment should happen at a young age. It is the young girls that we need to empower to make a significant difference. She Stood Up was devised with 45 students from 6 years to 12 years of age, studying in different schools of Chandigarh. We started the rehearsals with the wish to do something for young girls, but what and how, we had no idea. I sat with my young cast for the first few days and just explored the idea with them. I tried to gauge what was it that they wanted to share on the subject, what empowerment meant to these young children. Brainstorming happened for the next few days and we had the outline of our story with us. It was a simple story of a young girl fighting with the school authorities for something that she thought was her right.