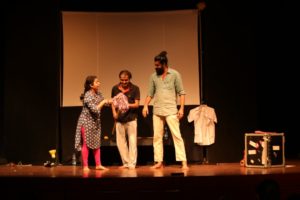 About the Group
Sandbox Collective is a creative services organisation that curates, produces and tours performances. It acts as a catalyst facilitating meaningful collaborations nationally and internationally between artists, cultural agencies and arts spaces creating an explosion of innovative artistic expression.

About the Play
Rosamma the Cow is fast turning into an unbearable pain. She scolds, rants and raves, and makes life miserable for all the other animals on the beautiful farm. Find out what happens to Rosamma when she’s sent off to a mysterious country far, far away. A group of actors combine storytelling, object theatre, and shadow puppetry to tell a compelling tale of patience, love, adventure, and imagination.

Director
Vinod Ravindran has worked in the theatre in various capacities. He started his career in theatre with B. Jayashree’s Spandana Theatre in Bangalore. As an actor he has worked with directors like B. Jayshree, Atul Kumar, Ajay Krishnan, Manav Kaul, Abhishek Majumdar, Kirtana Kumar and Sachin Gurjale. He wrote and directed Somewhat like a Balloon which opened at the Jagriti Curtain Raisers 2013, he wrote and directed Raja Tantra Choo Mantra, a play for children which opened at the AHA, Ranga Shankara International Theatre Festival for children. He also directed Ajay Krishnan’s Touching and Moving.

Director’s Note
Stories are everywhere and everyone has a story… and we can tell stories together. What worked most importantly for us about How Cow Now Cow is the simplicity of the story. We wanted to work on this play in a way that it leaves enough space for our audience to have questions and thoughts. That is what keeps us excited about this play. We are often asked questions about the play that we ourselves have never thought about. We used common every-day household objects to bring the story to life. The play uses a now archaic technology of the overhead projector (OHP). The rudimentary nature of the OHP technology and the physical interaction that is required to bring images to life is the kind of rawness that we wanted in the play.