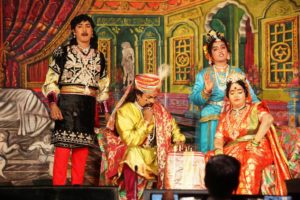 The Play
Thota Ramudu, a gardener’s son, loves Indumathi (the only daughter of the king of Ujjaini). The king rejects their love but gives Ramudu an option that if Ramudu earns a lot of money, he can marry his daughter. To obtain evil spirits, Mantrik Nepala needs a good, bold and young man. He finds out about Thota Ramudu and brings him for this purpose, promising him the wealth which he needs to marry Indumathi. Just before the prayers, Thota Ramudu finds out about the Mantrik’s evil intentions. He gets the evil spirit to kill the Mantrik and marries Indumathi. The disciple of the Mantrik comes to know about this. He bring back his master to life with the help of Sanjeevani. Mantrik obtains the idol of the evil spirit through cheap tricks and kidnaps Indumathi. Thota Ramudu with his moral strength kills the Mantrik and brings Indumathi back.

Director’s Note
The play Pathala Bhairavi is based on the movie by the same name written by Pingali Nagendrarao Garu. This story has been dramatised by Sri Surabhi Bhoja Raju Garu. Our plays are mostly mythological stories, and the young audience is not interested in them. So I directed this love story with the young members of Surabhi. Finally, this play is running successfully in our repertory. The production has socially relevant messages, special effects, tricks, and music.

The Director
Surabhi Jayachandra Varma Rekandar is the grandson of Padmashri Surabhi Babji. He is a recipient of Ustad Bismillah Khan Yuva Purskar Award from Sangeet Natak Akademi, New Delhi; Narasimha Rao Rangasthala Yuvapuraskaar from Potti Sriramulu Telugu University, Telangana; and many other awards and honours. He has performed in more than 4,500 shows. He has directed Jai Pathala Bhairavi, Kurukshetra, Annamayya Vennela, Kanaka Tara and Baala Mayabazaar and participated in many national and international theatre festivals. He has staged 13 performances in Passages International Theatre Festival, France. He has also conducted many workshops on Surabhi Theatre Techniques.

The Playwright
Rekandar Bhoja Raju was the second son of Rekandar China Venkata Rao and Nataka Kala Praveena Smt. Subhadramma. He was an actor and a great technical expert of theatre skills. He was a wig-maker, moulder, scenic painter, electrician, lighting expert, engine mechanic, besides being harmonium and tabla player. Bhoja Raju died in 2005 at Visakhapatnam while performing the role of Mayala Marati in Balanagamma.

The Group
Surabhi Theatre was established in 1885 at Surabhi village in the Kadapa District. It was invited by the Passages 2013 Festival Committee for performances in the cities of Metz and Paris in France, with 50 artists and technicians for a period of 35 days, and coordinated by Alliance Françoise, Hyderabad. French Minister for Culture, Aurélie Filipetti came to watch the play Bhakta Prahlada. The Hon’ble Mayor, Metz France, honoured Surabhi Babji with a gold medal. Now the children belonging to the 7th generation will be performing the play Mayabazaar.