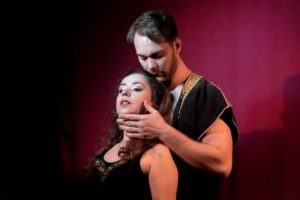 The Play & Director’s Note
We have decided to approach the classical Thousand and One Nights with a contemporary eye and abstract theatrical techniques (dance, physical expressions etc.). It is a delicate, yet intense performance. Scheherazade is the only woman to have become the wife of cruel and feared Shahriar, of her own free will and choice. The main question was ‘why is she sacrificing herself?’, ‘does she run willingly in the arms of Death?’ But there is more to her than the first sight. She is no martyr nor does she want to become one. Just like the mythical Sheherazade takes the cruel tyrant on a journey of fantasy and imagination through unknown worlds – in which the extremes of the human soul entwine like the lights and shadows of the Yin and Yang- we wish to take the audience through 1001 states of mind, 1001 fantasies, 1001 mysteries – only to come to the thought that wisdom and love can conquer it all, even cruelty. Theatrical dance, gracefully mastered by the two actors’ body expressions, gets more intense as the story starts to unravel and makes the invisible seen to the audience: their bond grows stronger. With only two actors, the play focuses on the male and female harmony, emphasizing the empowerment of women through wit. It also aims to bring to light the importance of art and the subtle power of theatre.

The Director
Ingrid Bonta was born in 1984 in Arad, Romania, in a small Saxon community. She decided to take up theatre courses at the age of 16 and pursued a short acting class at The School of Arts, in Arad and later joined the Arad Puppet Theatre as a puppeteer for a year. Ingrid studied Foreign Languages and Literature (German) at the National University of Bucharest and took a Master’s Degree in Theatre Direction. After graduating she staged various plays in theatres across Romania and took part in several theatre festivals in Romania and Europe. In 2015 she joined the initiative of Romanian actress Ruxandra Balasu and together they found Theatre Coquette, in the heart of Bucharest. This was the beginning of a constant directing career. Ingrid staged various successful performances at Theatre Coquette, and other state theatres in Bucharest.

The Group
Theatre Coquette is a young independent company in Bucharest, established in 2015 by a young group of theatre makers, at the initiative of actress & director Ruxandra Balasu. Since then, the group has been selected in various theatre festivals in Romania and abroad, and its productions have quickly entered the Independent Theatre movement in Romania and its performances have been showcased in various festivals and staged around the country. The group was awarded Best Foreign Group at the Nova Drama Festival, Bulgaria in 2016 with the performance The Colonel and The Birds. In 2017 it has been the only Romanian theatre to be selected at the largest theatre festival in Asia, receiving excellent reviews, being endorsed by the Romanian Cultural Institute. Our group is led by Ingrid Bonta, theatre director and puppeteer, and Ruxandra Balasu, actress, director and cultural manager, along with Daniel Divrician, visual artist and stage designer. The production Barbarian Nights had been invited to open the International Independent Theatre Festival in Bucharest in November 2017. Since 2017, Theatre Coquette has been a founding partner for the Association of Independent Theatres in Romania, thus becoming a strong supporter and active member in the indie Romanian arts.