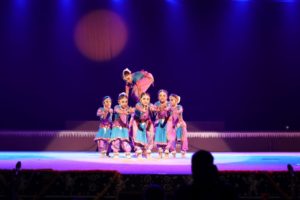 New Delhi, November 17, 2018: With a colourful representation of the various folk dance and music from the diverse states of India including Assam, Rajasthan, Punjab and Manipur under the guidance of Dr. Laique Hussain, National School of Drama today inaugurated the much-awaited biannual theatre festival for children, Jasnebachpan, at the lush green lawns of the campus amid much fanfare.

Shri Arun Goel said festivals like Jashnebachchan help them to develop their personality.

“I congratulate the National School of Drama for organising the 14th edition of the international theatre festival for children. Besides organizing festivals for children, they also organise various short term courses like Sunday Club, which is a very good initiative. Theatre is something which is not given to us by the colonial powers, rather it is our own art form which was born in our own land and has been practiced since ages,”Arun Goel said.

Shri Rudraprasad Sengupta, who was one of the guest of honours at the event, dedicated the recognition bestowed to him to the various theatre workers in the country.

“I am thankful to my NSD friends for honouring me. I don’t know whether I am worthy of this honour. But I am glad to receive the honour. I am accepting this honour on behalf of all the theatre workers, who probably don’t have money to give shape to their craft. Theatre is expensive and it needs money more money than any other art form because it doesn’t depend upon technology. Man power is involved in every stage,”Rudraprasad Sengupta highlighted.

Dr Arjun Deo Charan pointed out why theatre is important in a child’s life.

“Theatre plays an important role in children’s life because it raises the observation power in a child. As plays are mostly based on the issues of our society, therefore it raises awareness among the kids and enable them to become a responsible citizen,” said Arjun Deo Charan.

Abdul Latif Khatana shared the highlights of this year’s Jashnebachpan.

“We have plays talking about various issues be it gender discrimination or parent-child relationship. We also have theatrical interpretation of Ramayana and Alice & Wonderland. This time we have three-year old play group to 133-year old play group,”he said.

Suresh Sharma said, “Ministry of Culture has allotted Rs 180 crore for the betterment of NSD. We have also proposed the formation of four new Sanskar Rang Toli and we are assured that ministry will help us in expanding theatre across the country.”

Almost 800 underprivileged kids from various NGOs across Delhi and NCR attended and enjoyed the opening ceremony. The idea behind this initiative was to bring those children to the mainstream and inculcate enthusiasm for art and culture along with entertainment at a global platform.

Debuted in 1998, Jashnebachpan, is a venture of T.I.E Company of NSD, started in order to contribute to the growth and development of children’s theatre across the country. Post its successful stint year after year; it has now become one of the largest and most important theatre festivals in India for children. This year 23 plays will be staged in the four auditoriums – Sammukh, Abhimanch, Abhikalp and Little Theatre Group (LTG).