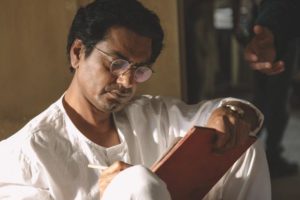 ‘I am a walking, talking Bombay.’
‘Saadat Hasan Manto, RIP. He lies in that grave, wondering: Who is the greater storyteller? God or Manto?’
–Saadat Hasan Manto.
I enjoyed watching the biopic ‘Manto’,  A great Indo-Pakistani genius comes alive in this film. A man whose life-world is torn apart by the brutal Partition, one whose life thereafter would always bear the scars of that trauma.
Manto’s intense, and yet funny Urdu storytelling elan comes to life, as does his quirky humor, his roving gaze that took in details of street life with merciless precision (always privileging the marginalized street person, sex worker or insane victim of the India-Pakistan partition), and stitched them into narratives.
It is a measure of Nandita Das’ skill as a director, that five Manto stories are woven into the fabric of the film, one each for his five most creative and tormented years–often, the film slips from a ‘realistic’ biographical description into the heart of a Manto story. Only later does the viewer come to realize that s/he is now out of the story, and back to Manto’s life.
Hats off to Nawazuddin Siddiqui for pulling off such a complex role with elan–he captures the humor and dark irony of Manto’s personal conversations, as also of his stories with a seemingly effortless ease.
Rasika Dugal has a sidekick role–as Manto’s wife Safia, she is reduced to the role of a codependent, mothering wife, who takes care of him in his darkest moments.
I loved Rajshri Deshpande as Ismat Chughtai–she looks a bit like the young Ismat and portrays her love-hate for Manto well (‘Manto my friend, Manto my enemy’).
The film reminded me of a forgotten Bollywood matinee idol–Shyam Chadha. He was Manto’s closest friend and might have broken the rule of the filmic triumvirate–Raj Kapoor, Dilip Kumar, and Dev Anand, had his life and career not ended tragically in an accident on the sets.
Tahir Bhasin is adequate to the role but lacks Shyam’s extreme good looks, and his flashy personality.
The film relives two of Manto’s best stories–‘Thanda Gosht’ (Cold Meat), and ‘Toba Tek Singh’. The former about a man stabbed to death by a jealous sweetheart confessing that he had an extra-marital quickie with a corpse, and the latter the ultimate Indo-Pakistani story about the horrors of Partition, seen through the eyes of a madman.
One wishes that the film had spent more time re-creating ‘Toba Tek Singh’, and less on Manto’s rehab and therapy. It does capture Manto’s depressive alcoholism after his move from his beloved Bombay to Lahore, but those scenes could have been shortened without losing the overall effect.
—Raj Ayyar