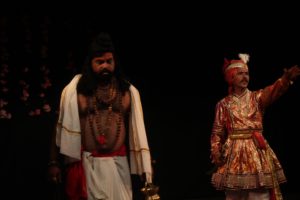 Maach is a folk theatre form of the Malwa region of Madhya Pradesh. This form was initiated around 200-250 years ago by Guru Gopal Ji of Bhagsipura of Ujjain. Even today three major akhadas of this theatre form viz. Daulatganj Akhada of Ustad Kaluram Sharma, Jaisinghpura Akhada of Balmukund Ji, and Mali Pura Akhada of Ustad Radhakishan Ji are prevelant. Maach has more than 150 scripts/ manuscripts and 125 melodies sung on 5/7 different rhythms. The main musical instruments of Maach are Harmonium, Dhol and Sarangi. Maach is a musical theatre that begins 10 at night and runs till 8 in the morning. Traditionally Maach is performed by men only, but Ustad Kalu Ram Ji’s Gharana has always had female artists as well.

Raja Harishchandra denounced his kingdom and mortgaged his own, his wife’s and his sons’s life to repay his guru’s debt, and to preserve the Truth. Written by Siddheshwar Sen and directed by Maach guru Babulal Deora, this presentation Raja Harishchandra has been staged by the group in many festivals held in different cities like Jamshedpur Tatanagar, Jharkhand; All India Craft Festival, Shilpramam, Hyderabad (Telengana) and at Ankur Rangmanch & Pratibha Lok Kala.

Born on 11 October 1963 in village Nayakhe of Ujjain District, Babu Lal Deora, at the age of 15, participated in the stories of Lokarg and Tejaji Maharaj and decided to step into the field of Maach. He was inspired and trained in Maach of Malwa by Guru Shri Siddheshwar Ji Sen and elder brother Ratan Maharaj Lokesh Sen. His first performance was as a singer in the chorus. After the death of his guru he continued the tradition. Later he went to Chittor for a workshop with Hafiz Khan, where he was introduced to some more melodies of Maach associated with Turra Kalangi folk theatre. Since then he has constantly been staging and promoting this folk art.