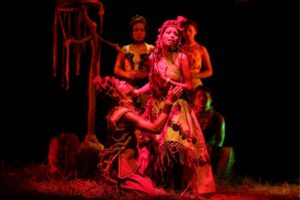 Crownless Prince is the story of prince Hamlet whose father is murdered by his uncle, Claudius who, soon after the funeral marries his sister-in-law. Hamlet is unable to accept the sudden death of his father and the hurried re-marriage of his mother. The ghost of King Hamlet commands his son to avenge his death by killing his uncle. Hamlet affects madness and with the help of a troupe of players stages a play, the plot of which is told by the ghost. The performance finally leads to the death of the whole family.

It is a common saying that as soon as one gets attached to Hamlet, he/she can’t evade it, as his way of seeing life changes after that. Same was the case with me. I got associated with Hamlet during one of my classes while I was studying at N.S.D. I played the role of Hamlet then and I don’t think his psychology ever left me. For me, there is no place for Hamlet and his emotions in the beautiful facade of the world that surrounds him. The revenge that prince Hamlet is called to wreak upon his uncle by his father’s spirit dispirited Hamlet. Hamlet’s situation can be traced to the untimely death of our political figures as well. When I started the work, it was meant to be a solo piece. But as I went along I realised that Hamlet cannot exist without the crisis of the world that he lives in, as each character brings out a different face of the crown prince. His ‘madness’ is as much due to external factors as it is due to his internal conflicts. These are the views regarding Hamlet which I have tried to present in front of you in this stylized piece.

Bhaskar Boruah is an upcoming playwright, director, and theatre trainer. He graduated from National School of Drama, New Delhi in 2015, with Specialization in Acting. He has directed many stage plays like Junakirkothare, Dhemalirkothare, Xastirxondhanat, Karnaittyadi, Monai, Tetontamuli, Bharmi, Ravan, Hamlet, Rjardeul, Kekoni, Oi…Who am I? etc. He established his group Joonak (a group of little stars) in 2008. He has worked with acclaimed theatre directors from India and abroad. As an actor, he has acted in 45 stage plays and participated in 18 National/International theatre festivals including Shakespeare’s International Theatre Festival held in China and Serbia, and Colombo International Theatre Festival in Sri Lanka.

William Shakespeare was an English poet and playwright who is considered one of the greatest writers to ever use the English language. He is also the most famous playwright in the world, with his plays being translated in over 50 languages and performed across the globe for audiences of all ages.

Replica was established in 1997 and has taken part in various all India cultural activities. It has received appreciation for its street plays, musical plays, stage dramas, mono-acts, etc. It also organizes The North-East India Drama Festival, a 45 days Residential Drama Workshop and stages the workshop production for 30 days at a stretch.