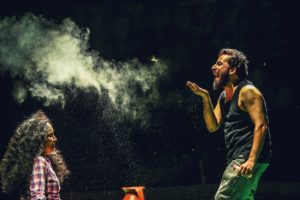 This is an independent dramatization of two famous works, one by N.S Madhavan (Higuita) and the other by Peter Handke (The Goalie’s Anxiety at the Penalty Kick). Higuita was staged for the first time 20 years ago as a 30-minute short play. The stage arrangement consists of a football ground with a church on one side. Father Geevarghese is the church vicar of a small town somewhere near southern part of Delhi. He had once heard the story The Goalie’s Anxiety at the Penalty box from Father Capriaty, his friend from Italy. Geevarghese, on his tiny television set in his room, is watching the world cup football match. In the centre circle of the football ground, the then and now Father Geevarghese, meets the people from his past – Lucy Marandy, Jabbar, his friends, and family. Imprisoned in their boxes, the goalkeepers stand like caged birds under the scorching sun. But what excitesGeevarghese is the image of Higuita, walking back peacefully to his own post, after kicking the ball to the farthest striker of his team towards the rival post. Father Geevarghese watches himself overcoming all barriers like Higuita. He retorts against the injustice happening in front of him. Footballs are ablaze and swinging in the air, and from the dark, someone yells…

Sasidharan Naduvil was born in 1963 in a remote village named Vallachira in Thrissur district of Kerala. Since his childhood, he was fond of theatre and performed many plays during his school and college days. Later in 1980s, he became a disciple of Jose Chirammel and joined the Root Theatre Group, one of the renowned theatre groups in Kerala, run by the theatre activist Chirammel. Being a theatre person for the last 35 years, Sasidharan has acted in more than 12 plays, written 27 plays, and directed more than 400 plays. He has won inter-university drama competitions eleven times held at various universities of Kerala, including the South Zone and National Festival, and has been awarded many a times.