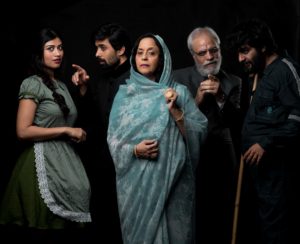 The Play
This is an adaptation of Henrik Ibsen’s controversial play Ghosts which was first staged in 1881 causing quite a stir. This is the story of the family of late Maharaja Kunwar Viraj Bhanu Pratap Singh, whose death is shrouded in mystery, talked of in whispers, and hidden in the inscrutable eyes of his widow, Yashodhara Baisaheb. As the story unfolds, we see the causes of the break-down of families, symbolised in the destruction of the havelis they inhabit. But yet the ghosts of the past cannot be destroyed. The play deals with the issue of domestic violence and suppression of women, whose voices are silenced by tradition and society. The voices of Ibsen’s women, just as the voices of women all over the world, need to be heard.

Director’s Note
Ghost is a family drama that deals with the conflict between generations due to changing human conditions, beliefs and customs which are handed down from one generation to another, thus degenerating the social system that was created to protect and nurture. These beliefs and customs turn into ghosts and keep haunting us in one way or the other. This relationship between past and future can make our present unbearable if not understood and analysed well. Ibsen had said “we sail with a corpse in cargo”. Therefore these ghosts need to be re-examined in the light of each individual’s experience, and socio-political and religious system he is confronted with. If not, the most gifted of society’s future generation will face destruction.

The Director
With over 30 years of experience actor, director and writer, K. K. Raina is a graduate of the National School of Drama, New Delhi. He joined Surnai theatre group as an actor but soon was entrusted with additional responsibility of direction. He has been directing and acting in all its plays since 1983 and is amongst the earliest members of the core group.
He has acted in over three hundred theatrical performances and directed over two hundred fifty shows. He has directed two short T.V. films and has been writing, directing and producing T.V. serials for Kashir Channel independently. He has acted in prime roles in over 30 Bollywood films and continues to do so. In the past he had acted in many T.V. serials.

The Playwright
Henrik Johan Ibsen (20 March 1828 – 23 May 1906) was a Norwegian playwright and theatre director. As one of the founders of modernism in theatre, Ibsen is often referred to as ‘the father of realism’, and one of the most influential playwrights of his time. His major works include Brand, Peer Gynt, An Enemy of the People, Emperor and Galilean, A Doll’s House, Hedda Gabler, Ghosts, The Wild Duck, When We Dead Awaken, Rosmersholm, and The Master Builder. He is the most frequently performed dramatist in the world after Shakespeare, and by the early 20th century A Doll’s House became world’s most performed play.

The Group
In 1982, Surnai began its journey with the twin objectives of promoting the folk arts of India and staging contemporary plays which are thought-provoking and focus on relevant social issues. In 2016, the group re-established itself under the aegis of its newly-established Surnai Theatre and Folk Arts Foundation. This foundation is committed to the uplift of women, starting with the survival of the girl-child, her literacy, health and the seemingly insurmountable problem of child-marriage and widowhood. The Surnai Foundation, with its focus on folk theatre, puppetry, and traditional story-telling forms like the phad hopes to reach out not only to urban audiences but also to rural platforms to carry these themes to villages in far-flung areas.