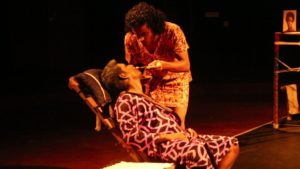 The Play
Maze tries to establish the relationship between a servant and an old man who are connected inside the web of memories and realties. The servant takes care of the old man and even tries to pretend as the old man’s wife in order to make him eat food. The attire of the servant wearing his wife’s cloths makes the old man sexually attracted to him and he starts expressing his longing. The memory of his wife leads him to a dream but he recognizes the servant’s smell and comes back to reality. In that unreal space there are moments in which both of them find happiness and comfort. Finally it is revealed that the old man was only a memory of the servant.

Director’s Note
Maze portrays the repetitive aspect of human life that there is no beginning or end to what we call life. But we still consider death as the full stop to it. The dead continue to live within the minds of the living. Memory and reality can’t be separated and they always give rise to the question, what is real? This moment ends with the next. Every relationship creates a circle from which the process of ‘coming out’ or ‘leaving’ is impossible. Here the old man and the servant create a space within their relationship that questions the material existence of each other. This interlocked space makes it difficult to have an individual existence. The old man continues to live in the memory of the servant and it is the memory of the old man that makes the servant live in his solitude.

The Director & Playwright
Sunil Kumar S., born and brought up in Angamaly, is a graduate in Commerce and is now pursuing his Masters in Theatre and Performing arts at SSUS, Kalady, Kerala. In the past five years he has been an active figure in the realm of theatre with his contributions in direction, acting and other important aspects of theatre. It is his passion for theatre that made him choose theatre as his career. He has worked with many prominent theatre practitioners in Kerala including Kumara Varma, Ramesh Varma, Vinod Kumar, Gopan Chithambaran, Adrian Schvarzstein, etc. He has also acted in various student productions including Dhojoji, Riders to the Sea, Procession, Christmas Night, Chakka, Interview, Machine, Kudukka, Group Photo etc. Maze is his first production and has gained the attention of many theatre practitioners and critics. Currently he is conducting theatre camps and workshops for students and theatre-lovers all over Kerala.

The Group
Department of Theatre, Sree Sankaracharya University of Sanskrit, Kerala has witnessed a number of inevitable changes. The department has introduced several changes in the graduate courses, admitted a number of research students, received substantial research and infrastructure grants, and brought new areas of research activity together, making it a vibrant and cohesive entity. Within a span of 17 years, we have become a prime department of theatre in India. Alumni of this department are showing their excellence in their respective fields and are now known all across India. Students are participating in all major international theatre festivals across the country. Moreover, many popular actors and directors of Malayalam film industry are former students of this department.