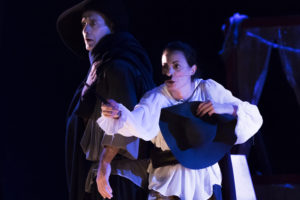 The Play
Our will is to stage all of Cervantes’ Exemplary Novels, and time will let us do so in our theatre life. Now is the time to stage The Spanish-English Lady and The Two Maidens – two novels with women as main characters and a common issue: travelling. Travelling with three comedians from the XVII centuries, who are fixed to the stage since then, telling stories to the audiences of all the centuries. Each tale is drawn as a different world, with different languages and resources: by ship, over the sea… by horse, on land.

The Director
Gonzala Martin Scherman was originally an actress at the Royal Drama Art School in Madrid. She started directing plays for her company Factorfa Teatro in 2004. Her drama education also includes Mar Navarro&#39;s School following Jacques Lecoq&#39;s techniques. She has directed and written plays for children, young audiences and adults. In the last four years she has specialized in classical dramatic plays for young audiences, adapting the best authors of the Spanish Golden Age such as Cervantes or Lope de Vega. She has won several prizes as best director and her plays have received several Audience awards.

The Playwright
Diana I Luque is a playwright and translator. She is a member of several theatre investigation magazines in the writing department. She has written plays both for young and senior audiences, such as EI Nino Erizo (La Machina Teatro), Fisuras CON, Escritos En 10 Escena, La Imagen De 105 Sometidos, La Tierra En 10 Que Habitan 105 Peces, Y Tras 10 Puerto, Premio Ricardo Lopez Aranda, among others. She has translated The Quality of Mercy, by Peter Brook (La Pajarita de Popel. 2014) and The Power of Yes by David Hare (Primer Acto 244, 2013).

The Group
Factorfa Teatro Theatre group was founded in 1993 by Salvador Sanz and Gonzala Martin Scherman. Factorfa has dedicated its creations to young and senior audiences with very important achievements, such as being the finalist in the Max Awards for children theatre with Pinochio. We are located in a Cultural Centre in La Eipa, a District in Madrid since 2007, where we both rehearse and organize theatre workshops for children. We receive the support of the Madrid Community and the Ministry of Culture and Education. We have visited several countries with our plays such as Turkey, Dominican Republic, Equatorial Guinea, Chile, Argentina, USA, Morocco, Mexico and
Colombia.