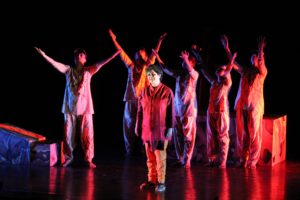 The Play
The play Agnijatak concerns children who are the future citizens of the world and who happen to be the most marginalised beings as they are exposed to both emotional and physical threats. Being vulnerable and defenceless, they cannot fight the atrocities by adults. The play addresses the burning issues of the globe through allegory. Monika, the protagonist hears from her unborn child that no baby is to be born in this ghastly world anymore. The foetus disturbingly questions the mother about the atrocities taking place world-wide. Throughout the interaction between the mother and the unborn child we get to see this planet in a horrifying light. The play ends in an optimistic note where all hope is yet not lost.

Director’s Note
Through directing this play I found an opportunity to convey the disturbing thoughts that come to a thinking mind while observing the terrible degeneration of the world both by physical and metaphysical parameters. Since the play addresses the issues of atrocities, which is becoming a global phenomenon, I, on principle tried to give it a look which is not area, geo or locale specific. Only time is specific here because the acts captured in this play are very much contemporary. I worked with a big cast which is always challenging for a play which is organically intimate. Though this play has elements of an adult fairy tale, I intentionally crafted pieces of news highlighting the morbidities happening worldwide to transform this play from surreal to real, from soul to skin, from the world of fantasy to the burning realities.

Director & Playwright
Ishita Mukhopadhyay has scripted and directed over 20 plays for her own group Ushneek and other groups as well. She had been associated with Desh, a biweekly magazine as a theatre critic for 3 years. She also has written more than 15 plays which have been aired by all India Radio, also scripted and co- directed numerous programmes of Kolkata Doordarshan. She also showed her multi-direction talent while scripted and directed tele-serials for channel Zee (Hindi). In 1984, at the age of 20, she directed the play Ghar, an adaptation of Jean Paul Sartre’s The Room. She also performed as an actor under the direction of Salil Bandhopadyay, Sunil Das, Manoj Mitra, Aloke Ranjan Dasgupta, Wolfram Mehering and others. Ishita has received Uttam Kumar Award, Pramathesh Barua Award, All India Critics Award, All India Women Association Award, Kalaratan Award and many more.