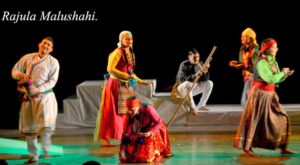 The Play
Rajula Malushahi is a folklore of love between Rajula, daughter of trader Sunpati Shauka, and Malushahi, a great king of the Bairatha region in Uttarakhand. On knowing that Rajula has been engaged, Malushahi, disguised as a mendicant, reaches Sunpati’s residence. Sunpati poisons Malushahi and disposes off his body in the mountains. But Mirtu Garhwali, a mystic sent by Malushahi’s mother Dharmadehi, revives him from death. Malushahi returns and, after a battle, reunites with Rajula.

Director’s Note
Rajula Malushahi, composed by the renowned theatre musician, late Shri Mohan Upreti is based on his extensive research as imbibed in his work on the folklores of Uttarakhand, and sung by legendary folklorists. The melody and rhythm structure were ingeniously adapted while composing this retelling of the folklore Rajula Malushahi. This production is a tribute to Sh. Mohan Upreti, founder of the group Parvatiya Kala Kendra, who adapted the folk dances and songs of this region to the requirements of contemporary stage, creating various choreographic compositions which were staged in Delhi and other cities of the country and abroad.

The Director
Amit Saxena is an alumnus of National School of Drama, New Delhi. He is trained in Seraikella Chhau dance and Pantomime. Amit has directed plays and musicals for various cultural organizations of Delhi on multifarious themes. He regularly conducts Art &amp; Culture Appreciation Course focusing on inter-disciplinary subjects like body-movement, dance-therapy, mime, voice and speech, ethnic visual arts, and literature, for young students, theatre practitioners and art lovers.

The Playwright
Shri Brajendra Lal Shah was a renowned writer, novelist, poet and playwright of Uttarakhand. In 1992, he was honoured with the prestigious Uttar Pradesh Sangeet Natak Akademi award for his contribution in the field of play-writing.

The Music Composer
Late Shri Mohan Upreti was a teacher, singer, researcher and theatre musician who pioneered the operatic singing traditions of Uttarakhand like Kumauni Ramlila, Jagar and other folk forms and created forays on the modern theatre platforms during the 1970s to 1990s. Operas for which he composed music are Rajula Malushahi, Ajuwa Bafaul, Rasik Ramol, Bhana Gangnath, Uttar Ramcharitmanas, Andha Yug, Inder Sabha, Meghdoot to name a few. He was honoured with prestigious awards like Uttar Pradesh Sangeet Natak Akademi award, Sahitya Kala Parishad award for Theatre Music and Uttar Pradesh Yash Bharati award amidst many others.

The Group
Parvatiya Kala Kendra was founded by Late Shri Mohan Upreti with a view to promote the folk forms of Uttarakhand. The Kendra’s aim is to build an indigenous theatre, which could reflect the life of the hill- people of Kumaon and Garhwal, their aspirations and their problems, their aesthetic sensibilities and awareness.