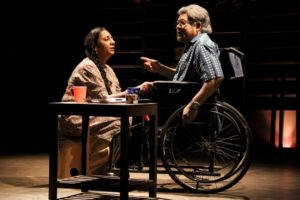 Ashim and Joyita lives in their apparently normal household leading a conjugal life which seems to be a normal one, but gradually, their inner turmoil and unnatural co-existence penetrates the audience’s mind. Their attendants Mahadev and Chapala, are also dragged into the collisions somewhat unwillingly. Ashim is a crippled man, sitting all day in his wheelchair, due to an accident. The atmosphere turns claustrophobic when a mysterious apparition of Ashim is seen in the house. Joyita’s mind is troubled by the ghostly presence of a man who looks like her husband and is moving around the house like the past Ashim. She becomes psychologically ill and tries to escape. She provokes Ashim to commit suicide and Ashim turns her attempts to another game of clever torture. The play ends with Joyita’s ailing mind left to choose between the two – natural and the unnatural – where would she go?

Directing plays for almost 25 years I have had a number of subjects to choose from, so I did social, mythological, historical and other plays. I kept the ‘time’ and ‘society’ as a consideration for choosing the subjects for my plays. The long journey as a theatre director taught me a number of things and brought me to these troubled times, when relationships and conjugal lives of men and women are at stake. A teleplay by a famous writer moved me and sowed the seed of Wheelchair. Though I did not take anything from that story, it somehow inspired me to write about the two characters Ashim and Joyita and their peculiarities. I had a discussion with one of my associates and getting positive inspiration from her, I chalked out the storyline immediately. Many sequences of the play were built during the rehearsals as we went on creating and discarding sequences. The play actually took shape while rehearsing – just like we do in workshops. I kept simple commonplace sentences for dialogues and the entire tension builds up mainly through acting and visual treats for the eye, taking the cinematic license of two similar looking men, at the same time using a dummy which is a novel thing. Apart from the technical marvels, what drove me strongly is the inner tension of the two characters and their collisions which gives the play its uniqueness. I believe in keeping a thriller short, as unnecessary stretching destroys its crispness. So only seven sequences say it all …

Suranjana Dasgupta has acted in lead roles in productions directed by eminent directors of Kolkata. As a singer-actress she made a tremendous impact in Madhab Malanchi Koinya directed by Bibhas Chakrabarty and winning the prestigious West Bengal State Natya Academy award for the best actress in 1988, and in 2006 for Kanan Pisir Japomala. She has done workshops with Peter Brook in 1989, Marcel Marceau in 1986, Jean-Guy Lecut in 2006, and a playwright’s workshop with Alan Brody in 2007. She has written many original plays like Manadasundari, Kanan Pisir Japomala, Tukaalaam Durganaam and Wheelchair.

Nirbak Abhinay Academy, Kolkata was established in the year 1981 as a mime group by eminent mime artist Anjan Deb. The group participated in Natya Swapna Kalpa twice with their productions Dulai and Aar Ekjon Mahapurush. The group has produced children’s plays like Monikahini, Gachpakhalir Dukkhogatha, Bhusandir Maathe. It has produced Sita Theke Suru and Ratmohana based on Salman Rushdie’s novels and adapted by Sharmila Maitra.