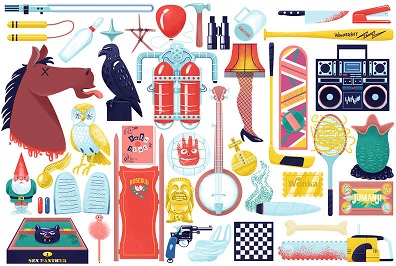 Loosely described as, “objects used by the actor and those that are placed on stage” props are considered important as long as they serve on the stage.  After the show is over very little attention is given over them and they are loosely packed and kept until further usage.  How many of us have wondered about its deeper significance?  Do we even for one look closely at “ the skull held by Hamlet” or the “ crystal glass unicorn held by Laura” in Glass Menagerie?  Even once does the director care to explain to the actor for him/her to closely touch and feel the object as not only a part of the text but also beyond the whole text.  It should provide a moment of heightened emotion not only for the actor themselves but also for the audience.  Every object is to be placed by the set designer and the director with great fortitude and understanding.

The Natyasastra states that natya was created to meet the demand of a plaything, it’s a “ Krida” (a source of pleasure and diversion to boredoms, wants the miseries of daily existence).   Therefore an art form can induce a temporary state of diversion of one’s immediate sorrow and an escape into a world of pleasure and happiness. Nataka or drama can do this more efficiently than other art form, because unlike other arts, it is both drisya and sravya, it has visual and aural appeal. It can satisfy us by graceful or spetacular senses presented on the stage, can gratify our ear or heart.  This is efficient only through props that makes the experience of the audience go beyond his reality.

Andrew Sofer, in his book, “ The Stage life of Props” says that, “ the object must be seen as having a sign.” The stage props hence has a strong presence, sometimes as strong as the actor themselves.  As Felix Bossonnet sees the props they are much more than the physical presence they hold.  Props have to be read between the complex relationship between the actor the text and the audience.  It provides a complete whole experience of transmission of the audience into the world of the “ play or krida”.  As Sofer sees the distinctions between the props and the characters should become more and more blurred, it should be amalgamated as one whole.  The responsibility of this hence is not just within the text but by the directors as well as the actors.

Gouri Nilakantan Mehta holds a masters degree from Miami University and is currently persuing her Phd in theatre from the dept of Arts and Aesthetics at JNU Delhi. She has over 23 publications to her credit and has presented several papers at international conferences at Japan, Pakistan, Dubai and America. She was awarded the best graduate student award by Miami University. She has also directed over 12 plays and has produced more than 25. ABOUT GOURI Honest and straight forwardness is appreciated by me rather than a soft and gentle approach FAVOURITE QUOTES the only short cut between two points is a straight line