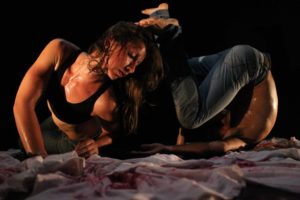 Desaparecidos#43 aims to give voice to the dramatic event of the 43 Mexican students of Ayotzinapa who disappeared on 26th September 2014. It is a strong performance of great emotional impact, an artistic Re-Action to a tragic reality: the en-forced disappearances afflicting Mexico, and an original dramaturgy, made not only of words but also of physical actions, sounds, songs and projected images.

Desaparecidos#43 is not only a performance but also an authentic act of rebellion, a work exalting freedom of opinion, expression and demonstration, which are being worldwide threatened. It is an artistic example of the international influence of mass media and globalization and how they can sensitise the public opinion and help to ask for justice. It is a hope hymn, able to let red flowers grow from a stack of bloody clothes – ‘They wanted to bury us but they didn’t know we were seeds’.

Anna Dora Dorno was born in 1976 in Italy. She graduated at the University of Bologna – Department of Music and Performance. In 2004 she founded the experimental theatre company Instabili Vaganti. She has directed and acting in – Avan-lulu, which received the special award of the Jury at the 6th   International Festival of Theatre and Visual Arts, Zdarzenia (Poland), The Ritual, the result of a 10-year research project all around the world and performed at the 18 Bharat Rang Mahostav in Delhi, Ausencia – Alone in the crowd, premiered at the 32nd  Fadjr International festival of Teheran (Iran), Made In Ilva, which received a nomination at the Total Theatre Awards at the Edinburgh Fringe Festival 2014 and was the winner of 10 national awards for the best performance, Desparecidos#43 based on the true story of the missing students in Mexico and winner of the patronage of Amnesty International. She holds workshops for performers in universities and academies all over the world including: Grotowski Institute in Poland, Shanghai Theatre Academy in China, National School of Drama in India, and UNAM in Mexico.

Born in 1977 in Italy, Nicola Pianzola graduated at the University of Bologna – Department of Music and Performance. He graduated in physical theatre at the Nouveau Cirque school of Bologna and at the Grotowski Institute of Wroclaw (Poland). He is currently a performer and playwright in all the productions of Instabili Vaganti Theatre Company. He has won several national and international awards as a performer of the solo show Made in Ilva including the nomination at the Total Theatre Awards at the Edinburgh Fringe 2014. He collaborates with the University of Bologna, Department of Music And Performance where he gives workshops, work demonstrations, lectures and film screenings about physical theatre. He won the DAMS award for his research and experience in theatre with actors with handicaps. He writes for Hystrio theatre magazine and fattiditeatro theatre webzine.

Founded in 2004 by Anna Dora Dorno and Nicola Pianzola, the company focuses on an experimental ongoing research in physical theatre and performing arts. Anna Dora Dorno works worldwide, producing performances and directing projects, collaborating with international artists, performers, musicians and video makers. Their poetic work is able to overcome the labels and the divisions between theatre, dance, visual arts, and to communicate strong, emotional, impacting messages. Their performances have been translated in 3 languages and presented in more than 20 countries in Europe, Middle East, North Africa, Latin America and Asia, winning several awards, including the nomination to the Total Theatre awards at the Edinburgh Fringe, and premiering in important festivals such as FIDAE in Uruguay, NLGX in Beijing, and 8th Theatre Olympics in India. Their methodology is valued and requested in many universities and academies all over the world.

With the patronage of Amnesty International Italy
Playwright: Nicola Pianzola