Daniil Kharm’s Play: Mondays are best for flying out of windows 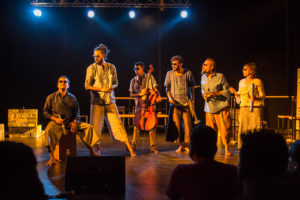 The Play
A girl finds a job as a cashier in your store, turns the handle on the cash-till and dies. What do you do? Stick a mushroom in her hand and pretend she’s alive. People throw themselves off windows, they leap out of cupboards, they spend maddeningly long hours in queues, they attack each other with snot and cucumbers, they fall, they sleep, they fight, they die. This is the world of Daniil Kharms. Chaotic, absurd, sometimes frightening, often incomplete. And you find that the only rational response is to laugh. The worse it gets, the more you laugh. Kharms is the master of dark laughter. It’s so ridiculous, so absurd, it can’t be true, right? Right?

Director’s Note
Our approach to Kharms was from a state of complete unknowing. A piece of text, a thought, an idea or an image triggered off our explorations. The entire process was a challenging one to say the least. This play represents our individual and collective response to Kharms, conceived in a true spirit of collaboration.
Puppets play an important role in this piece. The choice of working with puppets was a chance occurrence. Not being trained puppeteers we started from scratch, using storytelling as a guide. Like every piece of ours, we see this work too as a work in progress, evolving as we present it to audiences. And as much as we want to engage and provoke you, the audience, we hope that you will engage with the piece and provoke us in turn. In true Kharmsian spirit, we invert the typical theatre greeting and direct it to the audience – Break a leg!

The Director
Rajiv Krishnan is a theatre director and actor based in Chennai. His first play as a director was an adaptation of the comic satire Accidental Death of an Anarchist (Dario Fo) in 2000. In 2004, he organized a fortnight long festival called ‘Angloscapes’ focused on the Anglo-Indian community for which he co-adapted and directed a play inspired by Tennessee Williams Glass Menagerie in English. It was with this festival that the theatre collective Perch informally came into being.

The Playwright
Daniil Kharms (1905-1942), was an early Soviet era absurdist poet, writer and dramatist. He was often incarcerated by the Stalinist regime of his time for his unconventional and rebellious ways. His adult literature was not published during his lifetime and he was confined to writing for children. He is said to have starved to an anonymous death in the psychiatric ward of a Soviet hospital after being arrested during the siege of Leningrad in 1942. His stories defy easy characterization – they may start humorously but quickly turn dark, many featuring random acts of violence.

The Group
Perch is a theatre collective based in Chennai. It was formed by a motley bunch of actors, designers, filmmakers, journalists and others in 2008. Perch has been constantly exploring new ways of storytelling on a variety of themes from pure fantasy to contemporary Indian reality, from humour to political satire. Starting with adaptations of well- known plays and short stories, they have also explored devised work which is multilingual, collaborative and ensemble driven with a strong focus on visual design and music.

Commissioned by The Serendipity Arts Festival