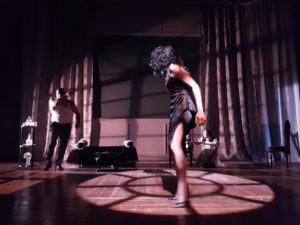 Stormy Weather is a murder mystery that keeps the audience guessing till the end. One morning, Noel, a man with many enemies, is discovered murdered in his bed with fifteen stab wounds. The prime suspects are summoned to the house by an unconventional inspector who interrogates each of them. Noel’s wife, sister and lover seem to have strong motives. The arrival of a storm complicates the investigation further, till the murderer is finally revealed.

Stormy Weather is presented as a black & white murder thriller, in the film noir or ‘Dark

Cinema’ style of movie-making of the 1940’s and 50’s. The show also consciously uses melodramatic elements from ‘whodunit’ and horror genres. The show aims to take elements of the film noir genre and transplant those elements into the three dimensional space of live theatre. The characters may seem to reveal a desire to escape the characters they are forced to play while trapped within the silver screen. There are several layers to the performance that attempt to allow the characters to transcend their cinematic stereotypes. I wrote Stormy Weather in 1995, inspired by a nightmare. My script was first produced in 1999 by the University of Colombo and also included in my collection of plays which was shortlisted for the Gratiaen Prize for literature for the year 2000. I approached the script as a director rather than playwright, when I decided to include the movie element and add clichés from horror and thriller genres in the new production.

Visual and Performing Arts. Over the last two decades, he has been associated with The Royal Court Theatre of London, ART of Bangalore, Theatrum Botanicum of Edinburgh, Brave Theatre Festival of Poland, Rikskonsertene of Norway, The British Council, as well as the National School of Drama (by participating in the Bharat Rang Mahotsav Drama Festivals and also the 8th Theatre Olympics 2018). Jehan played lead roles at the Edinburgh Fringe Festival in the multi-award winning productions of Children of the Sea and Finding Marina. He has produced theatre and workshops in Norway, Poland, Scotland, Qatar and India. In 2001, Jehan founded CentreStage Productions, an amateur theatre troupe which produces original theatre in Sri Lanka. As a playwright, Jehan has been shortlisted for The Gratiaen Prize for literature, for The Screaming Mind (2000) and The Ritual (2008), and was on the panel of judges of the 2014 Gratiaen Prize. Jehan’s humanitarian efforts, though his Stage Hands Project, include work with children affected by poverty, natural disaster and war, as well as physical theatre productions with those living with mental and physical challenges.

CentreStage Productions is an amateur theatre troupe founded in 2001 by Jehan Aloysius, in order to produce and promote original theatre in Sri Lanka. Its productions are regularly studied in local universities, and several scripts have been nominated for Sri Lanka’s highest literary award, The Gratiaen Prize. Its ground-breaking ‘mix-able’ productions of An Inspired Swan Lake and Nutcracker (which have been featured on CNN and the BBC), combined soldiers who had lost limbs in the recently concluded ethnic war, with hearing impaired and mentally challenged performers who were all trained and choreographed by Jehan Aloysius.